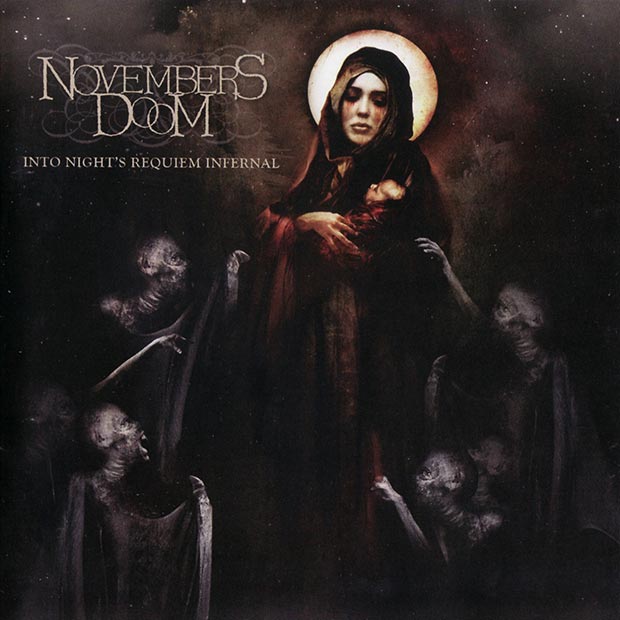 Into Night’s Requiem Infernal is a very interesting and intriguing disc indeed. I think the best way to describe it is as a hybrid of sorts. There are elements of stoner metal, death metal and even a touch of a phsycadelic influence. This combination may seem a bit odd, but honestly, it seems to work quite well.

Musically Novembers Doom is slow-burning, gloomy, riff-driven and heavy as hell. There are lots of good lead breaks and lines, a good example of these can be found in the track “Eulogy For The Living Lost.” Vocally they are all over the map, incorporating a clean vocal with a dark growl that reminded me of any one of the numerous death metal bands that are on the scene these days.

The one thing that I found real interesting on this disc is that in the midst of the aural pummeling the band inserts two very mellow songs, (“The Fifth Day Of March” and “When Desperation Fills The World”), that are acoustic-based with super clean vocals… both of which reminded me a lot of a Chicago band called Trouble. These songs are interesting too, because not only to they offer a brief respite from the pounding, but they also stand alone as really well-written tunes.

I like the depth and the variety on Into Night’s Requiem Infernal and feel as though this is a disc worth checking out. It is heavy, but still manages to offer more than just speed and distortion.