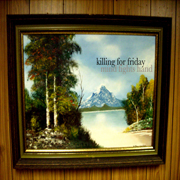 Mind Fights Hand is one hot EP from Canadian band Killing For Friday. The five song disc is full of choruses and hooks so catchy you will not be unable to get them out of your head long after the player has stopped. Killing For Friday’s sound can best be described as a cross between Pop and Punk. A modern rock alternative with scorching guitar solos, bombastic rhythm work and attention-to lyrical hooks that infiltrate the album creating a listener-friendly, high-intensity, compulsively listenable collection of songs.

The disc is well-produced and songs such as “Lydia You can’t Die, You’re Already Dead” and “Relationship With Things That Don’t Exist” are straightforward energetic rockers that should garner the band some much-deserved attention. “Where’s Our Communist?” is the tune that stands out as a personal favorite, not only because of the interesting title but also because it sincerely rocks.

I think my biggest complaint, and it is a small one at that, is that there is just over twenty minutes on this disc and it seems to go by so quick. I no sooner got into the disc when it abruptly ended. I would love to have had more tunes to listen to. Hopefully there is something in the works for another release in the near future.

Overall, fans of the modern rock scene should absolutely eat up this very good disc that will not disappoint the listener and as a matter of fact, will likely find its way into regular rotation in their player. Pick up this album as soon as you can; you will not be disappointed.  [ END ]