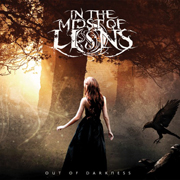 In The Midst Of Lions

With the release of their debut CD, Out Of The Darkness, Strike First Recording artists In The Midst Of Lions are proving that they have the goods to hold their own in the world of Death Metal. Musically they have been compared to bands such as Impending Doom, White Chapel and Meshuggah and Out Of Darkness is a complete auditory battering from the very beginning. A wall of grinding guitars and drums will have listeners banging their heads and snapping their necks before they even become conscious of it.

Lyrically they are part of a growing trend in the Death-Metal or Death Core genre, writing songs that take on spiritual and religious themes but from a different more positive angle. Instead of writing about traditional dark and foreboding themes usually associated with the genre, the band has taken a decidedly different approach. With titles such as “Crucifixion And Burial” and “He Is Risen,” the band has laid their convictions out there for all to see. Do not let the message fool you or turn you off though, because religious as they might be, the growling is almost undecipherable and does not detract from the music in the slightest bit. In fact, if you do not look at the attached lyric sheet you might never even realize it.

The first track lays the foundation for the rest of this fairly short record with a brutal intensity. This disc is unrelenting in its attack and with the exception of a couple of spoken word piano-laced tracks; it is a full twenty-four minute assault. Fans of this genre of music will not be let down these guys are serious about what they do and it shows.

This is a good albeit all too short release but one that will unquestionably solidify the bands status in the Death Metal scene. For fans of the extreme music, this disc is for you.  [ END ]