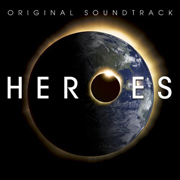 Hello Heroes Fans! If you like the show, then you’re going to want to pick this up. This sounds like it’s a long time coming, since the third season hit the tube recently. Heroes (although I have never ever watched an episode, shame on me), is one of those sci-fi series which carries a great cast, but an even better storyline. From what I gather, everyday common people realize they have superhuman abilities, a drama series unlike any other. I guess you can say, it’s a comic book style type series.

Iggy Pop, David Bowie and Bob Dylan grace this compilation along with notable artists like Panic! At the disco, Wilco, and The Chemical Brothers to name a few. I have to note that “Weightless” by Nada Surf is my favourite track off the album. The only song that has any popularity would be Panic! At the disco’s “Nine in the afternoon”.

What I dig about the album is that 5 music videos were released and created by Allan Arkush for the following:

Although the soundtrack rocks, it won’t make me want to watch an episode, but to those who love the show would appreciate this release.  [ END ]