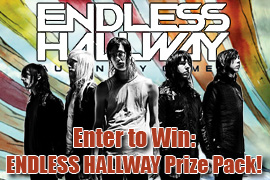 Brief Bio: Embarking on a quest to find exactly what it is you’re looking for in this life isn’t a mantra for kicks. For Endless Hallway, it’s a matter of spiritual survival and living up to your creative expectations. The Los Angeles-based five-piece, spearheaded by longtime friends Ryan Jackson (vocals) and Jono Evans (guitar), embraces a creative environment that’s uniquely expressive and raw. Their debut LP, Autonomy Games, harks upon the craft of music as visual art, while providing a distinct sonic sphere for each listener to return to. Produced by Noah Shain (Jordan Zevon, Orson, Nico Vega) and recorded between L.A. and El Paso, Texas, Endless Hallway honed in their searing rock sound found on their 2007 demo for a wide-ranging palate of emotionally-charged epics. Getting there was no easy feat for them, however. “I think the recording process was sort of like when you’re first learning to swim,” Jackson explains. “When you first hit the water, you exert force every way around you. We had a bunch of great songs ready to go, yet we definitely showed that naiveté. We managed to get our heads together in the end, to focus our energy, and the songs became what they needed to be.  [ END ]