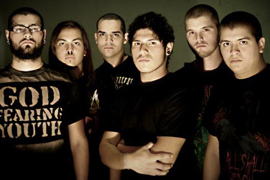 Interview with Earth From Above vocalist Josh Cortez

Strike First recording artists Earth From Above have release their newest CD Numbered With The Transgressors and are preparing to take their brand of uncompromising metal to the masses. Numbered With The Transgressors is a full on aural assault that holds nothing back. Vocalist Josh Cortez spoke with me about the band their message and their newest CD.

The name of the band Earth From Above is interesting and sounds as if there is a story behind it. Where did the name come from and what is the story?
Josh: Well, when EFA first started back in late 2004, we went under a different name, but felt it was time to change it when we started playing a different style of music. The name came from a calendar that was called “Earth From Above,” but we thought it was a perfect name that could represent what we wanted our band to be. Earth (or life) is given to us from our Father who is above in heaven. Therefore, everything that we have is a gift from God that we are grateful for. Our way to share these gifts with people is through music.

Now that your new CD, Numbered With The Transgressors, is complete how do you feel about it? Are you satisfied with the outcome?
Josh: We are definitely excited that it is finally done and released! However, we do feel that we could have done a better job as far as writing and recording. We had so many ideas that we wanted to incorporate into this album, but quickly ran out of time to do so. We are anxious to see how it goes for us. So far so good.

What was the writing process like for this CD? Did you guys all write together? How long did it take?
Josh: The writing process was tough. There were some days that we left practice after more than 2 hours without anything. There were definitely a lot of ‘writer’s block’ moments. We all contributed to writing the CD, but our guitarist Anthony was the core of the writing process. He comes up with the riffs and we work off of that. It took us about 3 months (on and off) to write new songs and re-make some of our old ones.

Give us some insight into the record, Numbered with the Transgressors, and the meaning behind its title?
Josh: NWTT is a project that people can listen to (and read the lyrics) and perfectly understand what we were shooting for. The album title relates to the prophecy of Isaiah that there was going to be a Savior who will come and die for the people’s sins. Jesus Christ was this man, and although he was sinless, he gave his life for the sinners, and was crucified with transgressors.

What can fans expect when they pick up a copy of Numbered With The Transgressors?
Josh: We wanted this record to be as exciting to the listener as possible. We tried to make it fast, heavy and somewhat technical. We did not want to settle for less, so we put some thought and effort into writing these songs. Fans can expect an energetic CD from start to finish.

The band keeps things interesting thematically. Can you talk about some of the subjects you tackle on this record?
Josh: I personally struggled with the lyrics and concept of the album. I was going through difficult moments at the time, but as soon as I took a step back and realized that I am not strong enough to make it through alone, I felt as if God pulled the load off my back and help me get through it. Another difficult thing was finding time to write the CD. We all have full time jobs, so it was tough finding time to get together and taking time to perfect our songs. When it was time to start recording, we did not have a drummer. A good friend of ours was going to fill in for the recording, but things happen for a reason and for circumstances out of our control, he could not go through with the recording. After another week, we went back to record drums with our old drummer, Mike, behind the kit. Mike did an excellent job and we could not have done this without him. Time was definitely a big issue as well.

It is good to see a number of bands breaking away from the usual gore/horror, misogynist and anti religious themes. What prompted you to pursue this specific course in lyrical concept?
Josh: That is pretty easy, our love for people. We want to share the same love that Christ has shown us to every single person; man, woman, child, old, young, that listen to our music. We feel that this message of love and redemption could not be expressed better than through music. Not every kid is going to step foot into a church. Religion has turned so many people off from God, so music (in our case metal) is one of the only ways that people will actually give Christ a chance to work in their lives.

Life out on the road can be very difficult. What keeps you going on those long drawn out tours? Do you have any inspirational stories that have taken place on the road that you would care to share?
Josh: Well we cannot really comment on that, since we have only been out on one tour. We went out for a month last summer, and what kept us going was our passion for playing live music and sharing God’s love to others.

When you are out on the road, anything can happen and often does. Can you think of any disastrous events that happened while out on tour? How did you solve the problem?
Josh: Nothing serious has happened to us on the road so far (knock on wood).

Do you find it difficult being away from family and friends for such an extensive period of time? How do you cope with the separation?
Josh: We definitely missed our families, friends and girlfriends when we were out that month. We just try to keep in touch with them as much as possible.

What is the one thing you travel with that you just cannot live without?
Josh: iPODS!

What does the future hold for you guys as a band?
Josh:A lot of tours. More CDs and even more tours!  [ END ]