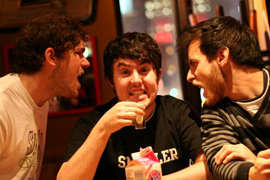 Ottawa band Assemble Me have been hard at work scheduling tour dates, hitting the road and just getting their name out. And they must be doing a good job. With the positive feedback rolling in regarding their latest release Atelophobia, it seems like things are going to be getting even better for these boys and they won’t risk missing any minute of it. Read on, you’ll see what I mean.

First off, congrats on the release of Atelophobia. I know it’s only been out for about a month by now, but how’s it been going?
Dan: Things have been good since the release. This record came out just as we were leaving for an east coast tour so it was an awesome thing to be able to, in essence, release it fresh and new in a new city every day. Plus all the response we’ve been getting is just amazing. Better than we could have ever hoped for. Locally the response has been just as great. I don’t think I’ve heard a bad response yet. [laughs]

Have you noticed any difference in the reception of this release compared to Sharks.Human.Danger?
Dan: The Sharks.Human.Danger release was so different. There was a lot of lead up and we had a huge party planned almost a month ahead. SHD release was more about us making our print. We hadn’t played a lot in the city or even toured at all when that record that it was important for us to make our mark. Plus the process with SHD was very different from the new record. With Atelophobia, we had developed a lot more as a band then from where we were with SHD. As proud of SHD as I am (I have the shark from the record tattooed on my collar bone) we really wanted to develop the songs and our craft. So for us the release was secondary to being able to represent it. Plus our actual release show was almost a month after the official release date. And after we had got back from tour.

So I read you guys have some tour dates coming up. What are the details behind those?
Dan: We just got back from the east coast, which was a riot. I honestly can’t wait to get back out there. The kids were just amazing out there. They love music. It doesn’t matter what it is. They just love it. We had metal kids just rocking out. We’re currently in the process of booking an Ontario tour with our friends in Killing For Friday. So far dates are rolling in well. We’re really excited to be doing Ontario again. It’s been almost a year since we’ve done any extensive touring in our home province. It’ll be nice to be able to hit some smaller cities too. Since the record has come out we’ve only hit major markets like Toronto and Ottawa (of course). So it’ll be nice to hit those smaller cities we love.

Is there anything else being planned for the near future?
Dan: Always talk of tours. We’re trying to work some things out for later in the summer. I’d really like to head out east again. We’ve been talking to a couple of bands about it, and if it works out it’s going to be a sweet tour that’s for sure. But touring is really what we live for and what we want to be doing with the majority of our time. We love being on the road and the more we can the better.

And, I have to ask, is there any sort of story behind you guys getting together?
Dan: Cam and I have known each other for a very long time. Something like 8 years…. We played in a couple of bands together through high school and years after that. After a year or so of not doing anything I decided to move with a couple of friends to Ottawa, to try and start again. Ottawa is a very musically diverse city. Cam had also moved to Ottawa to attend college. We jammed a couple of times while I tried to find other people to pull a band together with. Nothing really happened though. Everyone I tried to get together was either terrible or just not cool people. So after another good 8 months of trying, Cam had moved back to Belleville to work and I just kind of bummed around.

Then, after some difficult circumstances with a couple of roommates, I talked Cam into moving back up to try again. We spent another 4 or 5 months trying out different people who just didn’t work. During all this time, my friend John (from This Is A Standoff) sent me the e-mail of a guy who had tried out for drums of his old band Forty Cent Fix. I dropped him an e-mail and it took him awhile to get back to me. He finally did in June of 2007 and myself and him jammed together without Cam. And it just clicked. We probably played for close to two hours. Basically after that we jammed a couple of times the three of us, moved into the house we’re in now, and started doing this full time, putting all our energy and money into it.

And you say that you guys have a friend who tours with you and tapes everything. What’s the story behind that?
Dan: Guido. He is our “merch guy” and pretty much the fourth member. We originally had the idea to bring him along to do merch and just film a bit on our first tour to see what came out with it. And it turned into a tour must. He is always willing to help with gear or merch or to drink our beer. But he’s also been there to catch the good, bad and ugly. Eventually we’ll use all the footage for something amazing, but for now he’s just banking hours and hours of it. He’s really caught some great moments. But he’s also been there for an outsider’s opinion. Sometimes, being in the band, it’s hard to see outside the band. And he’s there when we need him to be to knock us back into the real world sometimes. Plus he does some really funny stuff that’s too hot to share in this interview.

What’s the best thing that you’ve caught on tape so far?
Dan: We have a lot of great performance stuff of course. But you can really see our development as a band through these videos. How songs and sets came together. And even from us trying out some of the new material and seeing those develop. But we also have some epic moments from recording the last record that were unfortunately taped over. Also a personal favourite is from our last Ontario tour. We stopped in Belleville, Me and Cam’s hometown, to do some grocery shopping. We stopped in at Cam’s mom’s place and found this pool noodle. Y’know, those ones you play with when you’re eight and they’re always brightly coloured. Anyway, along the tour it was constantly being used as a weapon against people. Slapping in the face, poking… etc. So when we finally got to North Bay on like the 4th or 5th day of tour, it had broken. And so ensued the epic noodle battle between Guido and Jeremy. They used them like swords until Guido’s spin attack struck Jeremy in the face. My description is not doing it justice. It was epic.

Is there anything you’ve caught on tape that you wish you wish you hadn’t?
Dan: Lots of bad performances. There’s some moments in there that would be hard to watch but I would never want to get rid of them. They are part of the experiences that we’ve lived on the road. They’ve been a part of how we’ve developed as a band and as a family.

You guys have opened for some pretty big names. How has that helped you get your name out there?
Dan: We’ve been lucky to play with a lot of different types of bands. Which opens the crowd up a bit. Like, there’s a good chance someone who would go see Farewell to Freeway wouldn’t be interested in seeing The Flatliners. So we’ve been lucky to be given the chance to play to those different crowds in hopes of being able to cross over. I think as a band we’re lucky because we’re not stuck in one style of music. Plus we’ve also been given the opportunity to learn from these bands who have made it to where we want to be. It has given us the chance to talk and just see how it has to be done so we can get there.

If you could put together your ideal tour of five bands or artists, including yourself, who would be the other four other acts you would love to tour with?
Dan: This question is really hard for me to answer for the entire band. Because the three of us all have very different musical tastes. Jeremy would want us on some huge festival tour like Crue Fest or to open for Blink 182. Not saying that that would be terrible by any means. But myself personally. I’d love for the chance to play with Moneen. They are my favourite band and I would kill for the opportunity. Other bands would have to be Park, Far, and Polar Bear Club. Unfortunately two of those bands aren’t around anymore so it’s wishful thinking. But in reality, any tour we could be on that lets us play is all we could ask for. And maybe some pizza.  [ END ]