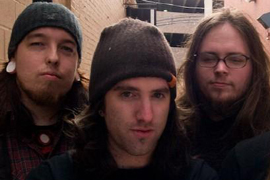 Interview with We, The Undersigned bass guitarist Jai Sadler

I’m sure the term Maritime metal has been coined somewhere, at sometime before my usage here, but if not – feel free to use it without worrying about royalties. Anyhow, among the groups leading the pack of Maritime metal acts that are slowly spreading the sound westward is We, The Undersigned. Employing a pretty monstrous guitar tone, acting as the primer to a layer of bright, chaotic vocal colouring and some very impressive drumming for texture, the band is poised to turn some heads with its unique brand of art as they continue spreading the madness at exhibits across the country. Having already played with some of Canada’s finest aggressive acts – from Protest the Hero and Fuck the Facts to The End and Cancer Bats – the band seems prepared to come into their own and make We, The Undersigned a recognizable name for metal fans from coast to coast.

Let’s start with the standard “who you are and what you do in the band” question.
Jai: Well, I would be Jai Sadler and would be the one playing bass guitar.

Can you try describing We, The Undersigned as a band using only nouns?
Jai: Randy Bachman, garberator, Chernobyl, “Centrefolds”, cyclone, grapefruit, Johnny Highway.

You had a chance to showcase at the ECMAs this year. How did you fare, and secondly, does a band like WTU benefit from the support of music associations like the ECMA or Music New Brunswick? If so, how?
Jai: It was actually the year before, when the ECMAs were in Fredericton, that we were invited to play the Heavy Metal showcase. We had a great reaction actually. The vibe at the show was really good, lots of kids. It’s hard to say if a band like us can benefit from these associations yet or not. The ECMAs have just started to recognize the east coast metal scene so I guess we’ll find out for ourselves at the end of this year when we release our first proper full length album. With the amount of work Josh Hogan from Diminished 5th Records has been doing trying to get the metal scene some recognition it wouldn’t surprise me at all if these associations began to support our type of music more and more.

The east coast, as I’ve come to learn, has a very, very rich pool of musical talent. How is the scene out east for “heavy” artists? Do you think you’d fare better in a different region in Canada?
Jai: Just like the heavy scene everywhere there’s up and downs. Venues close, bars close, the kids in the all ages scene are excited for half a year and then start to lose interest. It’s kind of the cycle for metal music, or so I’ve noticed. The population is a lot lower out East so obviously the turnouts you’d get in Ontario just aren’t possible in the Maritimes but otherwise the scene can be relatively supportive. We had a lot of help when we were starting out; we got booked on some pretty big shows, so we owe the scene a lot for that.

I meant to catch a date during your tour with WHBIT? – a couple of those guys are friends from school. How did you hook up with them, and how was the tour? Are there any good stories from the road?
Jai: We met up with WHBIT? a couple years ago in Fredericton, NB and then we ended up playing a show with them in Kitchener, Ont a year or so ago. I’m not even sure how the idea of touring came about. I think someone mentioned it to them in passing and then they’re record label sent me an email about it. The rest is history, or so they’d say. Hmmm… well this past tour some old dude bought one of their CDs for $100, lucky bastards.

You’ve had the chance to visit several other provinces on tour over the last little while – is there anywhere in the country you’ve visited that really stood out, or perhaps some really great shows that surprised you?
Jai: The Mountains in BC… well, BC in general. It’s almost like that’s the reward for driving across the Prairies. The scenery there is over the top. The show in Vancouver was bad ass too, definitely an unexpected reaction. I think our best show on the tour though would be in Brandon, MB. People should check that little city out, it was definitely a surprise. I can’t thank Shawn Urquart enough for helping us with that one, his hospitality was more then we deserved.

What types of things do you do to keep occupied while on the road – specifically, the long hours in the van?
Jai: If you’re not driving sleeping is definitely the answer to the long drives, other then that we mix it up with music and comic CDs. Speed, coke, caffeine pills, and punches to the nuts seem to keep the driver on his toes too.

By the looks of things, you guys are in the middle of piecing together an upcoming release – did you want to talk a little bit about where in the process you’re currently at? Have there been any major hurdles thus far?
Jai: We’d love to talk about it. We’re all really stoked on the album and are feeling pretty confident about it. Right now we have all the songs written and most of the pre-production done. We’re on the road for another 2 weeks, then we’re back home to polish off the prepro. We’re aiming to be in the studio come the last week of May to start drum tracks. Hurdles… well, money’s always a hurdle for independent bands, especially when your van breaks down in the middle of a tour. That’s really been our only hurdle so far, but in the end we’ll come up with what we need.

What kind of things have been in your stereo of late? Any must-haves?
Jai: Crack the Skye by Mastodon – that is all you need. (Ed. For some inexplicable, possibly superhuman reason, I actually knew they were going to include this album. If it needed a second motion, here it is: the album rules.)

Of the other bands you’ve had the chance to play with – Protest, The End, etc. – have any had an impact on what you put into your live performances?
Jai: For me, personally, it would be Protest. They’ve been one of my top 2 favorite bands for the past 6 years or so, before the idea of WTU was even put together, so to have been able to play with them a few times now still blows my mind.

What are the three best and three worst things about playing in a touring metal band?
Jai: Worst: Waking up in a van that’s covered in frost, watching the gas gauge lower with tears in our eyes, and having to listen to so much extreme metal at every bar we play. (Our drummer would disagree with me on this one.) Best: It being considered OK to go 4 or 5 days without bathing, generous beer and food donations, and ditching real life for weeks at a time to travel across the country.

Best spot to eat while on the road? Maybe there are different places for different areas…
Jai: Pizza Pizza! Yah, yah… it’s fast food, but damn it’s good. It doesn’t exist out East so when I’m in southern, Ontario I visit it a lot. There’s place in Guelph, Ontario, called Wimpy’s that we always make a point of stopping at as well. The burgers there are amazing. We discovered this little place on the north side of Vancouver too. It was called the Red Hot Grill and I’d guess that we’ll be going back there next time.

Anything you’d like to add to end the interview?
Jai: We’ve been keeping our blogs up to date this tour so if anyone wants to read about our antics you can check out the blog section at www.myspace.com/wtu. We just posted our 2nd of three video blogs too. We’ll be touring, hopefully across Canada, again in October 2009, so we’ll keep everyone posted.  [ END ]