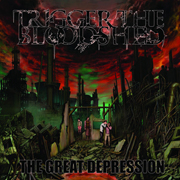 Brutal, Vicious and Heavy As Hell. These are about the only words I could think of to accurately describe the sophomore release from Metal Blade Recording artists Trigger The Bloodshed. The Great Depression is a serious auditory onslaught that does not let up from beginning to end. The band has undergone few lineup changes since Purgation; Johnny Burgan has taken the helm on vocals and with the addition of bassist Dave Purnell this roster is an even deadlier combination.

This CD definitely kicks things up a notch from their previous release, which was extreme in it’s own right, and that is saying something. Honestly, this is one of the heaviest albums I have ever heard and fans of all things extreme should be salivating in anticipation of its release on April 14, 2009. Everything you have come to expect from the band is here just multiplied by ten.

I was surprised after listening through this disc in its entirety that even though it is so extreme it does not sound muddy or crowded, which is a feat in of itself. Every instrument and every vocal has a place and that place is right in front of you, beating you senseless.

By far the track that stands out the most is the opener, “The Great Depression,” which begins with a killer guitar riff and is complimented by some of the fastest drumming I have ever heard. About the only break from the madness is the tune “I” which is a toned down interlude of sorts. It does not last long though because at slightly over a minute the barrage is back and in full effect.

The Great Depression unquestionably sets the bar super high for others in the genre and is an extreme metal heads dream come true.  [ END ]

01. The Great Depression
02. Warbound
03. Sanctuary Of The Wretched
04. The Scourging Impurity
05. The Dead World
06. I
07. Contempary Perception
08. Dessicate Earth
09. The Infliction Of Tophet
10. Disfigured Anonymity
11. Terminus