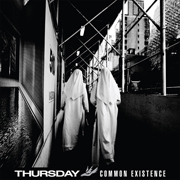 After the band’s last two full-lengths, it’s not far into Common Existence that one is forced to accept that, while this is indeed the same group of musicians that wrote Full Collapse, it’s really not the same band. And that just might be for the best.

Combining the better halves of their last two full-lengths – the big, open melodies of War All The Time and the ambient, crowded-but-controlled passages of A City By The Light Divided – Thursday has created another attention-worthy record in the vein of Full Collapse. The immediate explosion of “Resuscitation Of A Dead Man” offers an unparalleled sense of urgency that really drives the song forward. Geoff Rickley’s vocals and phrasing have also greatly improved, with some very creative harmonies employed in the song’s cathartic chorus. “Last Call” is treated to an equally-grave chorus with some additional vocal harmonies that recall the better tracks from ACBTLD.

The band tastefully borrows “As He Climbed The Dark Mountain” from their split with Envy to keep the intensity high in the album’s opening hat trick. Next up is “Friends In The Armed Forces,” arguably the best song on the album, combining all of what makes Thursday a household name. The song is just full of huge riffs that bring out the angst fans will so lovingly recall. “Time’s Arrow” slows things down with a quiet, ambient track that holds Rickley’s lyrics up to the candle. The second half of “Circuits Of Fever” offers one of the better examples of the band employing a few new tracks, with an upbeat, bass-driven coda melody reminiscent of something on an early Killers record.

Though the album is undoubtedly bottom-heavy, “You Were The Cancer” end things off beautifully, bringing back the ambient, stringy intertwining guitar leads and passionate screaming that remind us of how abrasive the band can be (in a good way). The album as a whole is a terrific listen, bringing Thursday back in a big way while propelling them further into new, uncharted territory. It’s familiar and fresh at the same time. Really, it’s Thursday.  [ END ]

01. Resuscitation Of A Dead Man
02. Last Call
03. As He Climbed The Dark Mountain
04. Friends In The Armed Forces
05. Beyond The Visible Spectrum
06. Time’s Arrow
07. Unintended Long Term Effects
08. Circuits Of Fever
09. Subway Funeral
10. Love Has Led Us Astray
11. Your Were The Cancer