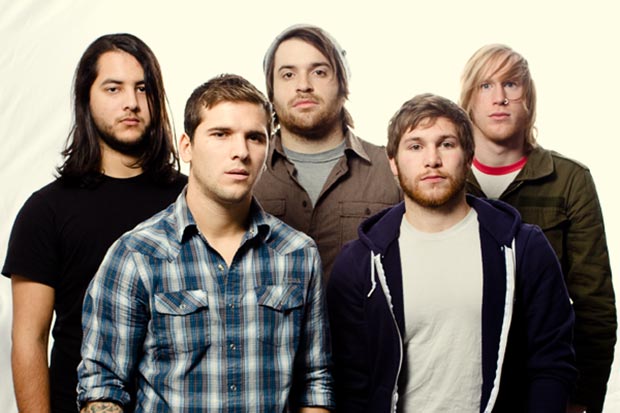 A very cool new band with a very cool name is Throwing Color. Throwing Color is a five-piece band from Berkeley Heights, New Jersey who have barely been together a year. The group has a kind of pop/punk/rock sound reminiscent of bands like Jimmy Eat World with catchy hooks and choruses. Although the band only formed in spring 2008, they already have recorded their debut EP titled “The Static Seas” due in April. The EP consists of six tracks, recorded with producer Rob Freeman who has worked with Hit The Lights, Armour For Sleep and Cobra Starship just to name a few. Currently, Throwing Color is playing shows in and around their hometown area with some more extensive tour plans set for the summer. Recently we spoke to the group’s lead singer Drew Duddy to find out a little more about the band and what they’re all about.

Throwing Color has been together as a band for less than one full year. How did you meet and decide to form a rock group out of it?
Drew: Well um, Dave and I, we’ve been writing songs for the past three years or so and we’ve all been friends from the same, like New Jersey scene and we’ve all been in other bands. We all came together because we really wanted to take our music to the next level and really take it seriously and you see a lot of people you were friends with go in other directions and decide that they didn’t want to take music further anymore. So we all got together and came up with this game plan and came up with Throwing Color from there.

What bands or artists would you say really influenced the sound of this band when you were growing up?
Drew: I would say vocally, I’ve been really influenced since I was young by the New Jersey based emo/punk scene, bands like Saved The Day and Midtown, they really shaped me vocally. As well bands like Jimmy Eat World, Juliana Theory and Thrice, I think those are the bands that really shaped me musically as a person. And for the band as a whole, I would say if I could name three bands that we all really dig, we all really dig their songwriting style and their personas in general, I would say Foo Fighters, Blink 182 and Nirvana. I think those are three bands that like exemplify true rock stars for me. I think for modern day, it’s really hard to say what a true rock star is so I think those are three bands that people look at and they’re like wow, they’re really awesome bands.

Now despite the short time the band has been around, you’re already set to release your debut EP The Static Seas in April. Now that it’s getting close to its release, how do you feel about how the EP turned out?
Drew: Oh we really love the EP, we’re really excited to release it because this was the first time that Dave and I were able to really collaborate with nothing holding us back. We’ve been in bands before where we didn’t really have as much freedom as we have now so I think this was the first album that we were able to click together and trust each other’s strengths. And um, we went to a guy, Rob Freeman who produced us, he just did the new Hit The Lights album and he’s done Armour For Sleep and Cobra Starship. It was awesome to work with him because I think he really solidified our sound to a T because we were really looking for that rock sound, but I think he gave it that pop structure that we really needed.

Yeah you mentioned Rob there which leads into my next question. To help you record the six song EP, you worked with a fairly prominent producer in Rob Freeman. How did you first get in touch with Rob and how did he end up producing for you?
Drew: Well Dave was actually filling in on guitar with one of our friend’s bands, this band Streets of Fire and uh, at the time, Rob was actually filling in on drums for the band. So um they were just actually practising in the studio and Dave didn’t even actually realize that it was Rob Freeman, the producer Rob Freeman. They started talking and pretty much, Dave said he had some songs written; this was before the band Throwing Color even started. And um, Rob said he would have him come in and show him some of the songs and then from there, we got in touch with him once Throwing Color got together and we had a good basis of the EP. So that’s pretty much how it came together.

What do you think is the one thing that Rob really helped with in terms of your sound or approach to your music?
Drew: I really think he helped us with solidifying the hooks and the harmony hooks, I think that was the big thing that he was really good at. He’s overall like a genius when it comes to writing catchy hooks and catchy songs so there were some choruses that we would write that we dug and he dug, but there were some things where they didn’t flow as well as they could have. He was really good at pinpointing what needed to be fixed to make the songs flow better as a whole.

What is the writing process like within the band? Do you all write together or is it more the efforts of one or two members?
Drew: Well actually Dave, our guitarist and he also does backup vocals, he is kind the genius behind everything. He pretty much comes up with the basic structure of a lot of the music and then he’ll take it to me or he’ll take it to the rest of the guys in the band and usually we’re pretty stoked on most of the stuff. I usually come in and come up with some vocal ideas and then me and him collaborate together on some ideas. And then sometimes the other guys, say if we have some trouble on a part, they’ll come in and bring their ideas to fine tune a song. So it’s pretty much Dave writing all the music and Dave and I working on the vocal and lyrical parts.

I know it’s early and the EP hasn’t even come out yet but does the band have any plans yet to record a full-length album anytime soon?
Drew: Oh I mean in the big picture, I think that’s definitely what we want to do in the future. We’re already writing, as soon as our EP was finished we were already in the practice of writing new songs, I mean we already have a lot of material we’re hoping to get out in the near future. I have no idea when that’s going to be, but we’re really just trying to get a bunch of ideas together. I think the next step is we really want to get a full-length together, definitely.

Throwing Color of course hails from New Jersey. What’s the music scene like there these days? Are there other strong, up and coming bands we might be hearing about soon?
Drew: I mean New Jersey, since I was young, New Jersey has had an awesome scene, especially in the emo/punk and pop rock and even metal, every kind of genre is thriving in New Jersey. The only problem right now with New Jersey is there’s kind of a transition period because metal and hardcore became very popular in New Jersey since last year, I mean nothing against metal and hardcore but there had been a lot of violence in that scene so a lot of the venues were getting shut down. So right now, we’re in a period where we’re trying to gain trust back with these venues to be able to play again, to be able to really start this scene again. There still are a lot of bands, Streets of Fire who were really good friends with, other bands, I think there are so much bands out there in New Jersey that have a lot of promise, especially in our area.

What does Throwing Color have planned for the near future and the rest of the year? What are your touring plans like?
Drew: Well starting in late February, we’re actually going to be playing a few local gigs and then on March 14th we’re going to be playing a battle of the bands, it’s actually the semi-finals of the battle of the bands to play at the Bamboozle Festival so we’re going to be in that and hopefully it goes well. Then we’re going to be doing South By Southwest which we’re all really excited about. Then from there up until the end of April, it’s a lot of weekend dates and hopefully once May comes, we’re going to hopefully be getting out on the road and doing some longer tours. There’s nothing confirmed yet, but we’re in the process of getting that all together.  [ END ]