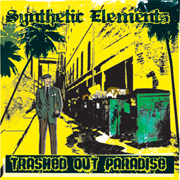 Synthetic Elements is a riotous, high-energy, trashy, Pop-Punk band whose newest CD, Trashed Out Paradise, has just recently been released. The band has influences redolent of The Clash, Green Day as well as a more modern Nu-Metal feel. The mixture of skillful musicianship and a striking production with some first-rate songwriting make Trashed Out Paradise a darn decent CD.

The thing I like the most about this disc is the amount of diversity the band has included. One minute you are listening to a Pop-Punk tune such as “They’ll Never Understand” and the next moment the ska/reggae infused “Dancin’ Time” is cranking. There is even an acoustic driven tune entitled “Falling Away,” that while toned down a bit is still enjoyable.

The multiplicity of musical styles makes listening to Synthetic Elements even more enjoyable. I believe it is also, what will separate the band from others who are only one dimensional. By refusing to be pigeonholed into a specific genre and with more than enough melodies and catchy choruses to satisfy most any listeners, Synthetic Elements have written an album that will appeal to a larger section of the population.

I must also mention that the band has included a cover of the campy song “Wooly Bully” that has been totally revamped and while I was caught off guard at first, is actually quite a cool version. While it is too early to tell if the band will have what it takes to make it in the business, (it is difficult to make that sort of judgment based off a twenty-eight minute CD) what I have heard here on Trashed Out Paradise is quite notable to say the least.

I think this disc is worth checking out and it would be a good idea to keep an eye on these guys, they are young ambitious and full of talent and if they continue to write such strong tunes they very well may become a household name in the very near future.  [ END ]