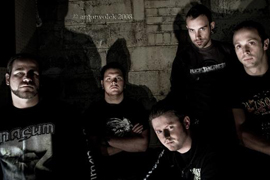 Episode Summary:The Governor returns with a double-dose of Canadian loudness on a brand new episode of The Governor’s Ball!

First The Governor sits down with vocalist Alissa White-Gluz of Montreal’s The Agonist to talk about their mix of styles and how they gain fans by killing everyone but a small portion of the audience. Then The Governor meets with guitarist Matt Zadkovich of Toronto’s Starring Janet Leigh for a chat about avant-garde violence, nerdy math metal, and their upcoming album Spectrum.

Plus on “Some Sly Advice” Sly talks health and safety for both the manly men and the lovely ladies… and listen for your chance to win tickets to The Governor’s Bash 4 – May 9 in Toronto featuring Fuck The Facts, The Great Collapse, and Sylvus!