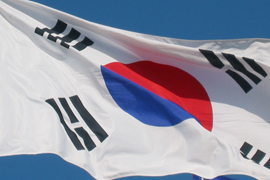 If you want to impress a Korean friend, try chomping on the still wiggling tentacles of a raw octopus, washing it down with a shot of Soju, and belting out a lively rendition of a Sinatra track of your choice in a sweaty Karaoke room. At first glance, in fact, you could be forgiven for thinking the entire Korean music scene is about a musical accompaniment to drinking. Korean chart tunes are a painful fusion of girl-band pop and depressingly familiar European dance, designed to be sung out of tune by aging businessmen on another late night away from their families. Fortunately, like most scenes, the real talent lies a little deeper.

A glance at the visiting artists gives a good indication of Korea’s musical coming of age. Oasis, the Chemical Brothers, Muse and Pendulum have all dropped in for sell out gigs over the last couple of years. Promoters clearly see East Asia as a growing market: as a music journalist here, high profile musicians come to you for an interview. The incoming talent has bought with it big developments in the outlook of local musicians, many of whom are stepping away from the cringe-inducing stereotypes and starting to produce music of real note.

‘Nell’ (넬) are perhaps the best example. Since stepping out of the shadow of their mentors – Korea’s most popular rock band, Crying Nut (크라잉넛) – Nell have produced album after album of heartfelt soft rock in the style of an upbeat Radiohead. Rocktigers (락타이거즈) have taken a more American direction, with hillbilly-influenced performances of energetic Elvis-rock produced by four men with impressive quiffs and one of the most attractive lead singers you’re ever likely to stumble across. They might wear check shirts and have flames painted across their guitars, but Rocktigers on stage performances consist of pumped-up enthusiasm and smiles all round.

Whilst many countries have truly nationwide music scenes, it’s fair to say that Korea’s is dominated by one small part of Seoul, the university district of Hongdae (홍댸). Hongdae is a party animals haven: numerous super clubs, live venues galore and streets full of bars that never close. There’s even and Irishman getting in on the act: Mark Baker and his popular band ‘St John the Gambler’ regularly treat us to a dose of good old Irish folk-rock. Pretty much every Korean artist of any note appears in Hongdae almost every weekend, either to mix at clubs like the monstrous M2 or pulsating live venues like the lively sweatbox ‘FF’. Galaxy Express (걜럭시 엑스프레스) are the true local heroes; a heavy edged Hongdae rock band who play At the Drive In influenced tracks, often to several audiences and venues in a night.

If you listen to Korean radio, of course, you’ll still be subjected to throw away acts like Wondergirls – a bunch of underdressed schoolgirls who probably received more airtime than the next five biggest artists put together last year – but the local scene is growing, and the newfound passion is infectious. Music in Korea is very much like the cuisine: filter out the live octopus and focus on the barbeques, and you’ll soon find you can’t stop ingesting it.  [ END ]

The Rocktigers – Run (too fast to live, to young to die) video – www.youtube.com/watch?v=mf0HqRt1_nU&feature=related