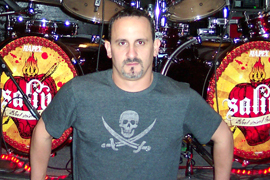 Chances are if you have gone to see a concert recently, you paid little to no attention to the sound guy working intently behind the mixing board making your favorite band sound their very best. A very good friend of mine, Rory Romano has been an audio engineer in various capacities for almost twenty years. Rory Romano began his career working in some of the biggest recording studios in Manhattan such as Soundtrack NY and The Power Station. As a recording/mix engineer Rory had the opportunity to work with artists as varied as Meatloaf, Aerosmith and Iron Maiden to name a few.

About eight years ago Rory made the switch to the live side of things and has since been the man behind the mixing board on tour with artists as varied as Michael Tolcher, Kill Hanna, Hansen, Vanessa Carlton and a plethora of other big name artists. Crisscrossing the globe he has worked endless hours and dedicated himself to making sure that when you, as a fan, pay your hard earned money to see your favorite band, they sound their very best. I recently caught up with Rory, who had just gotten back from a European trek with Kill Hannah, and posed the following questions for PureGrainAudio.

What kind of training do you have? Do you feel the path you took is common in the industry?
Rory: Initial training came when I attended The Art Institute of Atlanta and received an Associates Degree from their Music Business Management course. After graduating, I moved to NYC and began working in recording studios. I had 10 years of studio engineering under my belt before diving into the world of live sound. I am not sure how common it is for an engineer to transfer from the studio to live but I have come across a lot of engineers who have done both.

When did you know you wanted to become a live sound engineer?
Rory: I just love being behind a desk mixing whether it is live or studio. When I went out on my first real tour mixing FOH (front of house), it was then that I knew this is where I wanted to stay. I really enjoy the adrenaline rush of having to get so many things done in such a short amount of time. Reminds me of the days when I used to do jingles in the studio.

How did you get your first SR gig?
Rory: My first true SR gig came from a friend who was tour manager for a band and had recommended me to the band. It worked out that I had already worked with this band in the studio back when they were making demos. There was a certain level of comfort on both sides and we wound up working together for almost 2 years.

How do you find work?
Rory: In the beginning I was teamed up with a tour manager who brought me in on the gigs he was hired to TM (tour manage). From there it got a little easier with networking while on the road. The combination of my work speaking for itself and the contacts I have made have kept me busy for the last 8 years since committing to touring full time. In the process I have also become a tour manager as its helped keep me busy in this world of shrinking budgets and needing to double up on duties.

What separates a good sound engineer from a bad one?
Rory: Their paycheck. Just kidding. I think a good sound engineer pays attention to detail and is not afraid to take criticism or suggestions from anyone. Being open to suggestions can only help make things better. Of course, the obvious would be a good engineer knows how to use any type of equipment and can make a show happen with gear that may not be the most desirable. Those are the challenges I love most. Going into a venue with sub-par equipment and at the end of the night people saying they have never heard that room sound so good is a great thing to hear.

What are some bad habits some sound engineers have that bands should watch out for?
Rory: The first thing that comes to mind with this question would be engineers who think that louder is better. You do not have to make the audience’s ears bleed in order for a band to sound good. In addition, I see some engineers rely on computers too much with trying to tune a PA, whether it be a small club, amphitheater or arena, and forgetting to trust their ears. Not saying that computers do not help, they do, but at the end of the day, it is the human ear that will be doing the listening. You have to trust yourself enough once you do get desired results from using a program like SMART.

What can bands do to make life easier for their sound engineer?
Rory: The one thing for me is to have a band that can pay attention and listen to their FOH engineer while doing sound check. Of course, things are different at each level of touring. However, with younger bands, I would suggest they listen to their experienced FOH engineer. I have a certain way of operating that makes everyone’s life easy during sound check. There is no need to spend more time sound checking than what is necessary. After that then the band can have all the time to jam.

What advice would you give students either going into school or just graduating about getting a job in this industry?
Rory: The first thing I would suggest is to learn etiquette. Know how to listen and take direction even if you already know it. In this business, you cannot just take for granted that everyone you meet knows what you know. Do not think that any job is under you. Being on tour with a band is like being part of a family/team. As a TM/FOH I am not above helping unload or load a trailer, setting up or tearing down backline, loading in and helping with merch (merchandise). At the end of the day the more you do, the more you learn, which will make you more marketable.

When you are on the road for a while, I am sure you see and experience many different things you might not even have known existed. Are there any stories that stand out in your mind as being exceptionally strange or odd?
Rory: You are right that there are many many things experienced on the road. Most of the strange and odd fall into categories not suitable for this article so I will give you some G rated ones. The odd things that come to mind are the legions of fans that wait outside a venue in any kind of weather for many hours before a show. One in particular was pulling up to a venue in Malmo, Sweden and the temperature was about 35 degrees and wind was howling and it was raining. It was about 8:30am when we arrived and there were at least 10 fans sitting outside covered with nothing more than some plastic and blankets. I mean the venues are so small and anywhere you stand, it is as you are right next to the band, but they have to be up against the front of the stage. More power to em.

What is a normal day on the road like for you? Can you walk me through it?
Rory: My life on the road is very different than at home. I usually get about 4-6 hours of sleep on average. Even though it is a long day putting on a show I try to find time to experience the cities we are in. I usually try to get our bus/van into the next city early in the morning. I will get up early and spend a few hours exploring that city, taking pictures, meeting people and just enjoying what that city has to offer. Once load in time arrives, I put on the work hat and its business as usual. Get the gear loaded in. The backline crew sets up the stage and while this is going on, I am making sure the PA system is operating properly. Once I feel the PA is suitable and no major adjustments are needed I begin to work on the stage mic’ing up the stage. I am a neat freak so will make sure the local crew is doing as I ask them to help keep the stage clean. Once the stage is pinned, I will go thru the monitor wedges with the monitor engineer unless of course I have my own mon (monitor) engineer on the road with us. Now that the PA and Monitors have been sorted out I will begin line checking with my stage crew. Going thru all the instruments, setting my levels, and making sure everything is working. This includes the bands equipment, the FOH and MON desks inputs, FX units and any inserts that are being used. Now its time for the band to take the stage and begin sound checking. I try not to spend more time than needed as I do not want to blow out my ears for the show, but I will not settle and until everything is working properly, I will not quit. Once sound check is done and I feel we are in good shape, and then the band can continue to work on things if needed allowing time is still available. After sound check is done I will hit the stage and make sure we have done all we can to make room for other bands needing to set up with minimal change to our setup. If I have the time, I will take a short nap so I can be rested for the show. There is nothing worse than trying to fight off being tired when needing to mix a show. If your ears are tired and flat it can affect the overall sound of the show. When the show is over, the teardown and load out begins. Once that trailer door is closed its time to sit back, chill and enjoy the life. All in all this kind of day would be from 8am to about 1:00am.

What is the one thing you travel with that you just cannot live without?
Rory: My Laptop. With technology so advanced and most buses having onboard internet it helps keep you connected with everyone no matter where you are.

How do you prepare for the physical demands of a tour?
Rory: I don’t really do anything to prepare for a tour from a physical standpoint, although my body is starting to tell me different.

What is the toughest lesson you ever learned in the live setting?
Rory: Don’t try to be something you are not. Stick to you what you know and do it the best you can. If you put too much pressure on yourself to succeed you can hurt yourself.

Do you decide on a suitable sound quickly, or do you tend to tweak tones obsessively?
Rory: I work fast as this is how I was trained in the studio. Once you get everything working properly quickly then you can take some time to tweak if needed. There is no need to really go overboard with an empty room, as it will change once people are in it. I get to a point where I am satisfied and then make the tweaks I need during the first song of the set.

Rory can be reached at romr[at]aol[dot]com