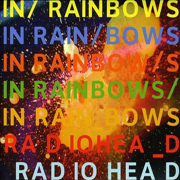 Ever since the now legendary Ok Computer elevated Radiohead to a position from which they can ignore the rules of the music industry, they’ve beaten a path away from convention. In both musical and commercial terms you’ll need a crystal ball to predict their next move.

This album, for example, was famous before anyone but the producers had heard it. The music industry is still reeling from the consequences of the short-notice, name-your-own price web release, but that’s a story for another day. How much of your hard earned cash is it really worth? So far the fans say (on average) $6, but of course, that’s before they’ve heard it.

Like many of Radioheads best, this album is a grower. At first listen it doesn’t thrill – surprisingly it combines a ‘thrashy’ sound, some odd samples and an even more minimalist sound then normal. Those hoping for a repeat of Ok Computer or The Bends will be disappointed, Radiohead are uncompromising in their originality.

The more you listen, the better In Rainbows sounds. The deep layered feel of “All I Need” will have you feeling euphoric well before the pulsing crescendo. The acoustic “Faust ARP” has shades of “Paranoid Android”. Album closer “Videotape”, tender and jarring, will have you reaching for the repeat button – an instant memorable classic.

In short, it’s impossible not to recommend In Rainbows to anybody who enjoys the understated sound and beautiful harmonies Radiohead are known for. It won’t be exactly what you expect, but let’s be honest; it would be a disappointment if it was.  [ END ]