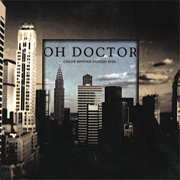 Simply Spectacular! That is the best way to describe, Color Beyond Closed Eyes. Each song is richly wrought with great melodies and harmonies juxtaposed over sporadic harsh screaming vocals. Musically the band is exceptionally talented and very tight and while the songs are approachable and fun to listen to, they are not overly catchy or syrupy.

Songs such as “Next To Me” and “Soundcheck” are straightforward high-energy rockers that should garner the band the attention they deserve. The opening track “Needle And Thread,” “I’ve Got Better Things To Do Than Dance” and “Aimed For Silence” are tunes that stand out as individual favorites of mine, mainly because they are a bit heavier and harder hitting than the rest of songs on the disc.

Honestly I found this disc to be enjoyable to listen to because it is intriguing the way the band combines different genres with such variability. One moment you feel as if you are listening to an alt-rock band and the next you find yourself right smack in the middle of an aggressive, heavy tune with screaming vocals, then just as quickly, the band brings things back to a more commercial vibe.

I am also a sucker for well-produced CDs and the songs on Color Beyond Closed Eyes definitely fit this description; on top of the good songwriting the disc sounds great. I found the record refreshing, as it is a bit different from most other releases on the scene at the moment; and that is a good thing. This is a very good release and one that does not disappoint in the slightest.  [ END ]