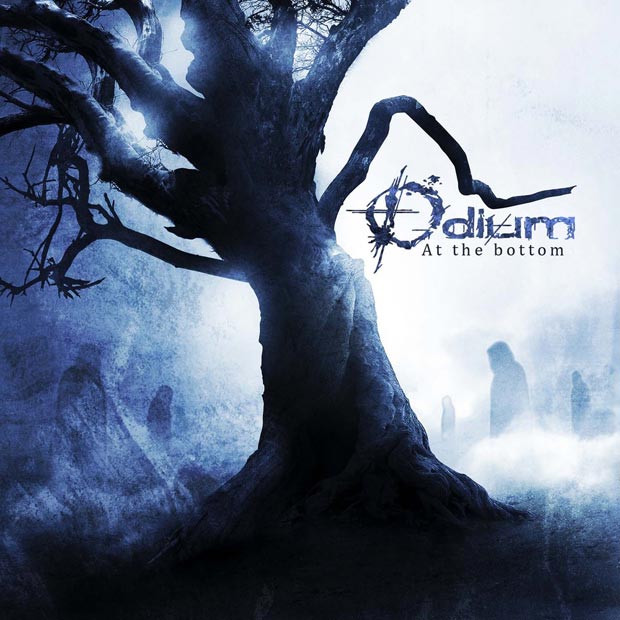 At first glance, Odium’s At The Bottom comes off like a typical metal release. It’s got the dark, ominous cover art. It’s got the melancholic song titles. Even when the disc goes in, the listener is greeted with a slow, sinister-sounding intro that, as a prescient metal fan would expect, explodes into a seemingly standard drum-driven opening passage. Don’t get me wrong – the music is good, but in a genre that has lots of “good,” it’s the bands that can share bits of “excellent” that climb to the top of the heap. About 1:44 into the album opener “Oblivion’s Gates,” when vocalist Tom Emmans belts out a cathartic chorus of “Devolving right from the start/let go of my hand,” Odium offers a glimpse of excellence.

Once the band anchors itself onto something as unique and compelling as Emmans’ monstrous melodies, the listener is then able to catch the other elements that make this record quite a standout as far as melodic metal releases go. Employing snippets of metalcore (listen to the machine gun blast beats of the first track’s breakdown or the intro to “It Goes Cold”) and even the ambient stylings of an act like Tool (check out the last quarter of “Serenity’s End” for a great example), the band is able to offer enough accessorizing to its punishing, pummeling double bass-driven melodies to build something with lasting value.

Alongside Emmans’ vocal performance is some rather impressive work from behind the skins courtesy of drummer Joe Mullen. The breakdown right in the middle of “Population Zero” employs a very tasty off-time china blast that boosts what would otherwise be a standard chug-fest to something more memorable. Similarly, just when the band has used a time signature right up until its expiry date, Mullen switches up the groove to something either more chaotic, or opens up a big, airy passage over which Emmans’ crooning or some compelling guitar leads are able to take centre stage. While there are a lot of guitar leads and some steady bass here worthy of a second listen, it’s Mullen’s percussive performance coupled with Emmans’ vocals that give this record its real appeal.

Fans of Swedish metal should gravitate towards this release, as it offers the same rhythmically-sound songwriting present in more recent In Flames material, while employing bits of the aforementioned ‘core or the big, bad Killswitch Engage-type brutality that seems to emerge more prominently in the second half of the album. These 10 tracks are packed with enough of just about everything that makes a metalhead’s mouth water, and enough hooks to keep them around once they’ve taken a bite.  [ END ]