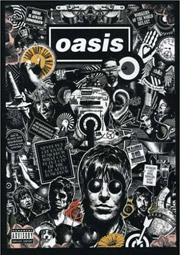 There are certain prerequisites for any Oasis documentary: it must portray the band’s life as an endless alcohol-fuelled party; it must emphasize the Gallagher’s unique form of brotherly love; it must include scowling; arrogance; flippant remarks and deviance. Lord Don’t Slow Me Down, of course, includes all of this.

Director Billie Walsh uses edgy, angular film – largely in black and white – to give a 60s, edgy feel. The focus is everyday life on tour – which seems somewhat less frantic then it used to be. We’re treated to some odd moments: a highly competitive game of ‘Frustration’, and the rather false feeling encounter with Girls Aloud at a photo shoot, for example. A whole new, calm Oasis, then. About time, though you can’t help feeling a little disappointed.

Of course, Liam and Noel are still playing up the intra-band warfare – the band commentary provides a real gem when Liam berates a cabbie for refusing to run Noel over. Even with the new calmer approach Oasis still often come across as a bunch of lads on an 18-30 holiday – frequently more interested in the football (sorry, soccer…) and booze than the music. They just start drinking a little later in the day then they used to.

What Lord Don’t Slow Me Down does really well, though, isn’t about the band – it’s about the fans. There are several stunning montages from all over the world showing huge audiences singing along and leaping around en masse to the old classics. Sit back and enjoy the love: no matter where they go, Oasis whip-up a storm.

There is no doubt where Oasis are still loved the most: back home in Manchester. On the live homecoming DVD included with the documentary even the moody Gallagher boys struggle to hide their affection for their audience. In return, of course, the audience makes no such attempt: they even damage the front barrier with their enthusiastic pogoing before a note has been sung. Nice, as is the euphoric sing along that follows.

If you learn one thing from the documentary it is this: Oasis are emphatically NOT done. They still produce the same classic tunes, the same euphoric live outings and the same die-hard fans as ever. It sounds as though they have a good few years left in them too: Noel declares the end of their career will come ‘When Liam’s hair falls out’. It doesn’t seem imminent, but I for one don’t want to risk it, the hair treatments in the post guys! Essential? No, but compelling viewing none the less.

Check out the: “DVD Trailer”