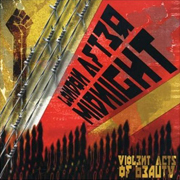 London After Midnight is the brainchild of Sean Brennan who also happens to write, produce, program and perform all of the songs on his latest disc, Violent Acts of Beauty. Stylistically this CD is a conglomeration of industrial, trance and Goth music that serve as the background for Brennan’s message of revolution. The over all theme of this disc is corruption in the government and the media of America. This is evident in the song titles such as “America’s A F***ing Disease” and “Feeling Fascist?” The message is even more evident in the liner notes of the CD where Brennan’s theories are laid out in even more detail.

“We are living in a time of great despair. Our Governments are run by the corrupt and by corporations whose goal is to keep us ignorant and apathetic. Our media is controlled by these entities with profit driven agendas. These agendas run contrary to our best interests.” These words are just a portion of the liner notes that proceed to call for a revolution. This album is meant to encourage people to consider the world around them as opposed to just remaining lethargic and ignorant of the events taking place, a sort of call to arms if you will. Truly, a timely subject considering the world we live in.

The tunes that I really enjoyed the most were “The Kids Are All Wrong” and the club mix of “Nothing Sacred” which is a good example of the successful combination of many different genres of music that dominate the disc.

Bottom line, whether you agree with the dark themes that rule this record or not, it is totally a disc worth listening to. The songs are well-written, melodic and groove-infected and at times even hypnotic. While at times, the songs seem to be full of angst and gloomy, I feel they reflect their gothic/industrial influences quite well.  [ END ]