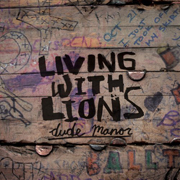 Short and sweet, the Dude Manor EP from on-the-rise Canadian melodicore act Living With Lions packs a pretty heavy punch for such a short little package. The album is being re-released on 10″ vinyl south of the border on Adeline Records, a label who’s impressive catalogue can certainly speak volumes as to the potential found within these 6 (five and a half?) blazing tracks.

After “Intro” had led into “Latter Is Better,” I was immediately met with a Daggermouth-type vibe. After going through the album notes, I wasn’t too surprised to find out that Stu McKillop (of Daggermouth and Aspirations) had worked on the record and even contributed vocals to a few songs. Really, there are quite a few similarities between the two acts, from the driving but not overly distorted guitar tones to the balls-out vocal melodies of Matt Postal. Still, I shouldn’t be selling them short.

Living With Lions does a great job at keeping the melody as consistent as the energy. In essence, the band rarely looses sight of the direction of a given song, whereas other bands playing this brand of pop punk can often get caught up in noodling or forced “breakdowns.” Tracks like “Said And Done” offer up a pretty significant dose of emotional rock in the vein of old Saves The Day to combine with some blistering 2/2 verses. “Colors” contrastingly keeps the upbeat energy at the forefront, plowing through until a big release of wide-open vocal melodies at the end. The closer, “A Noisy Noise Annoys The Boys,” is likely the standout, with the best combination of the ingredients incorporated throughout this short release.

Though it’s only an EP, Living With Lions did a good job at keeping Dude Manor trim – no wasted notes here. Whether you get your hands on this one first, or the band’s recently-released debut full-length, the results should be the same – you’ll be smiling.  [ END ]