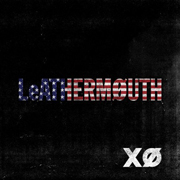 Xo, at least musically, is very direct and confrontational without trying too hard, which is worth a few points. The sound is something of a throwback to early ’90s hardcore on steroids with screamed and shouted vocals. The formula is attractive enough, but there’s a little too much bark and not enough bite to provide any lasting value.

The guitar tones are pretty big – yet another peripheral musical element the band has right, but there’s just not enough substance in the music itself to keep the album from drowning under its own weight. While the first track is a decent introduction to the album, band, and sound, and “Catch Me If You Can” offers up some fun thanks to some cool vocal/guitar interplay, the record starts to get grating after only a few tracks, and just never offers anything after that would refresh the listener’s attention span. The lyrics – sometimes misogynistic and often pretentiously rebellious – don’t really help the cause.

The project isn’t a write-off; in small doses, the band is more than palatable thanks to its no-bullshit delivery and some cool riffs here and there, but you’ll find it plays itself out far too early. Once this one goes onto the shelf, it’ll probably stay there for quite a while.  [ END ]

01. 5th Period Massacre
02. Catch Me If You Can
03. This Song Is About Being Attacked By Monsters
04. I Am Going To Kill The President Of The United States Of America
05. Murder Was The Case That They Gave Me
06. Sunsets Are For Muggings
07. My Lovenote Has Gone Flat
08. Your Friends Are Full Of Shit
09. Bodysnatchers 4 Ever (What’s A Pulse Got To Do With It?)
10. Leviathan