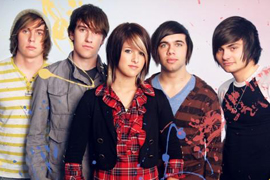 October of 2008 marked the release of Hey Monday’s first album, Hold On Tight. Since then, the band has been constantly touring, and with great success to say the least. Over 30,000 records sold, and a new tour bus to replace the beat up van and U-haul attachment that they all used to call home. Recently, while on tour with Fallout Boy, All Time Low and Cobra Starship, I was able to ask the band a couple of questions before they had to hit the stage.

Since the release of your album, how has the band developed?
Cassadee: Umm… We’ve been on tour, actually we went on tour in September, and then our album released in October. But I guess just like… we developed as a touring band, we’ve toured before but not together as a band. So I guess just like, getting used to being around each other all the time, and umm… you know, our live show has definitely gotten better since we started, and since we released our album, and we released…

Cassadee: Umm, we released two music videos from the album, and… yeah. We’re on our second single now.

Would you say that most of your songs come from prior experience?
Cassadee: Definitely. Umm… the whole album like, lyric-wise, is like all from personal experience, and like what friends and family has gone through. I was running out of ideas and I didn’t know anything about myself so I would just write about people close to me. So it’s all about real stuff.

How has life on tour with one another contributed to your personal relationships?
Cassadee: Umm… do you mean like… dating wise?

Cassadee: Oh! Umm… do you wanna take this one, Mike?

Mike: Umm… it’s… it’s definitely like… no matter how well you think you know somebody, you don’t know them until you’ve spent six months in a band with them, or like… tours like in a bus, and you’re like really living with these people. So it’s like, you see just like everybody; everybody has their like better side, and everybody has like, their like not so good side or whatever. And you just like… you kind like learn, you know, how to work with everybody a little better, what not to do around people, what to do around people, just like to make everybody’s lives easier.

So I saw you guys on TAI TV once (The Academy Is… Television). Would you guys say that you’ve joined a particular “Touring Group”? Like you normally see the same bands touring with one another, like I’ve seen you guys with Cobra Starship and The Academy Is… a lot.
Cassadee: Uh-huh. Well, I think after uhh… after we did the tour with We The Kings and with The Academy Is… we’ve done an acoustic tour with We The Kings, and then we’re gonna go to the U.K. with We The Kings again, and then something in the fall might happen with them again. So umm… I guess We The kings is a band that we’re definitely clinging to. Hopefully after this, we’ll be able to tour with Fall Out Boy again because we’ve formed a really awesome bond with them.

Could you tell me more about the song “Josey”?
Cassadee: Yeah. Umm… It’s not… like I don’t really know… like, I know people named Josey, but I don’t… the song isn’t about a girl named Josey. It’s just about people that I’ve known like through high school, and even now that just…

Jersey: [Pulls out a painting] Here’s a visual representation of that song. [laughing]

Cassadee: Umm… about… like people who just like party. Not… like, too much, because I mean if people like that then, like, that’s cool. But people who can’t have fun without drinking, you know, drugs or whatever. And just kind of like saying, you know, “There’s light at the end of the tunnel.” And all of the people’s names that I knew wouldn’t fit in the song, so I just said Josey. [laughing] And I didn’t wanna call anybody out.

The reason why I asked is because if you take out Josey, and put in my mom’s name, it’s my mom all over.
Cassadee: Really? [laughing]

I made her listen to it and she sat there nodding saying “yeah.”
Cassadee: That’s me! [laughing] That’s funny.

Have you ever had a genuine heart to heart with a fan?
Cassadee: Yeah. There’s a lot of times where you can tell that the kids are like, super inspired by our music. Just by like, you know, if they’re in tears, or if they tell you like… there was a girl who committed suicide, and she left a suicide note for her friend or whatever. And one of her friends twittered me and said that on her note she said that at her funeral she wanted them to play “Candles.” And so it’s just stuff like that. And that’s like, so extreme and like, really, really, really heavy. But like, it’s what we do to where it’s just like, all about the music and like, we have a message that we wanna spread, and we want people to like… you know, we’re a fun, happy, up-beat band, but we also have something to say.

What runs through your mind once the stage lights go out?
Cassadee: For me, I’m like a nervous ready. I get really excited.

Jersey: [Points to self] Whoa.

Mike: I used to get nervous, but then I realized that I like… I know how to play the songs. [laughing]

Alex: I really used to get nervous that like, my equipment wasn’t gonna work, but now we have a guitar tech.

A curious question that I have, because I would always be thinking about it. While you’re going about your daily routine, do you think about your music being played somewhere else at the same time?
Cassadee: It’s weird, yeah. Like, I’ve thought about that a lot, actually. Like umm… I’ve always thought about how, like… especially when kids are on their way to a show, I always think. Because sometimes I like, when I’m going to band’s shows I like listening to their music on the way to just like, get pumped and, you know, like getting ready for it. But I always wonder if people do that with our album. And umm… it’s just, like, really weird to think. It’s just so weird to have a product out there. Because for so long, you know, we’ve been in different bands and stuff that we’ve had like… we’ve had, you know, EPs or little CDs, like we never really got them out there for a lot of people to hear. And now, like, we’ve sold almost like 30,000 records it’s like, you know, a lot of people have it. So I think about that a lot. It’s really weird. [laughs]

What do you usually do after a show?
Cassadee: We all kinda do our own thing I think. I kinda come back and like… uhh… clean up.

Cassadee: Yeah. Or whoever is next. Because it’s like a rotation. It says that… Cobra is going on after us. So we’ll watch Cobra.

What is the line up for tonight?

Alright. What is one personal drive that got you here today?
Cassadee: Umm… For me, I don’t know. Like I don’t really know what… how I got my drive. Because I’ve been singing since I was 4, so like ever since I started, I knew I had to do it. Umm… I think it’s just like a goal that I’ve set for myself and I’m pretty, like, when I want something, it’s like a goal. I feel really headstrong about it so I guess it’s just wanting something, and wanting it so badly.

Jersey: Never giving up. It sounds really cliché, but not giving up. And always thinking it’s gonna happen.