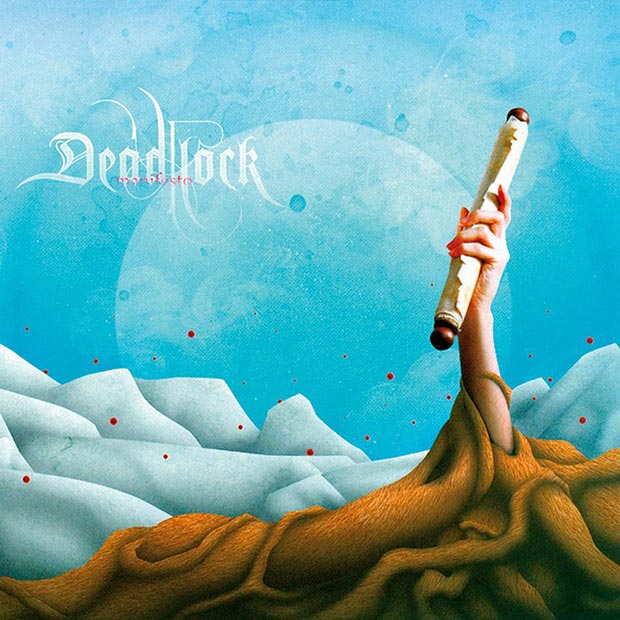 Melodic Death Metal is a genre which changes just as quickly as the seasons do. It’s constantly progressing. And with Deadlock being one of the most insane bands in the genre, they too are progressing at a rapid rate. This six piece band has been recording and wreaking havoc for 12 long years, devastating minds everywhere. The band didn’t originally have a female vocalist, but with the release of Earth.Revolt, Sabine was brought on as a full-time vocalist. Her addition only made the bond of Deadlock that much stronger.

This album starts off much differently than anybody would imagine. It actually kicks off with an industrial beat, which immediately got my attention. The opening track, “The Moribund Choir vs. The Trumpets Of Armageddon” actually sounds like it would be a track used in the Hellsing OVA anime series. The track leads perfectly into “Martyr To Science”, which is one of the bands heaviest tracks to date. Johannes’ harsh vocals are only complimented by Sabine’s light vocals. It’s amazing how the vocals can go from demonic, right over to sweet and innocent!

“Seal Slayer” is one of the most inventive tracks on the album. Again, it kicks off with a more industrial feel, only to be brutality taken over by the sick distortion of the guitars, and Sabine’s melodic vocals. When Johannes joins in, it is quite clear the band hails from Germany. Only German metal bands could obtain such a degree of insanity with their vocals.

This album is definitely the Deadlock’s best to date. I urge you to pick this one up. No. I take that back. I fucking demand you go buy this album. You’ll only be missing out if you don’t.  [ END ]