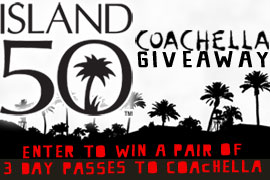 Brief Bio: The Coachella Valley Music and Arts Festival (commonly known as Coachella or Coachella Fest) is a three-day (formerly a one or two-day) annual music and arts festival organized by Goldenvoice held at the Empire Polo Fields in Indio, California, in the Coachella Valley. The event features many genres of music including alternative rock, hip hop, and Electronic music as well as large sculptural art. The event has several stages/tents set-up throughout the grounds, each playing live music continuously. The main stages are: Coachella Stage, Outdoor Theatre, Gobi Tent, Mojave Tent, and the Sahara Tent (2006 also saw the addition of a smaller Oasis Dome). The Coachella Music Festival has a desert setting (the city of Indio is a part of the Colorado Desert), with daytime temperatures frequently rising to over 100°F (38°C). The festival enjoys little cloud cover or shade. The temperature drops drastically after sunset.e.  [ END ]

Prizing:
To celebrate their 50th Anniversary, Island Records and PureGrainAudio is bringing the party to you with the chance to win a pair of 3 day passes to the best festival in the desert, The Coachella Valley Arts and Music Festival. One lucky Grand Prize winner will win a pair of passes to see all 3 amazing days of acts including headlining mega-star artists such as The Killers, Paul McCartney and The Cure. The Grand Prize winner as well as one runner up will keep the tunes going long after the fest is over and receive the entire The Killers’ catalog, as well as the complete album catalogs of main-stage rockers Ida Maria and Airborne Toxic Event.