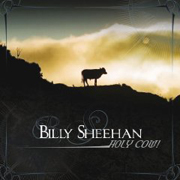 I have been a fan of Billy Sheehan since his early days of Talas back in the early Eighties. I was one of the many fans that were captivated by the sheer talent of Mr. Sheehan’s bass playing; the man is a brilliant. Over the years, I have heard a few other things he has done but this is the first time in a long while that I have actually listened to a full CD worth of tunes. Let me tell his newest CD Holy Cow! does not disappoint at all; as a matter of fact it is quite spectacular.

Sheehan is credited for playing a major portion of the instruments on this disc from bass, to guitar and harmonica and even the vocals and honestly, he plays them all about as well as he plays the bass. The musicianship is nothing less than stellar. Add to that a list of guest musicians that include Dug Pinnick, from Kings X fame and guitar virtuoso Paul Gilbert and the result is one hell of a great disc.

I was particularly drawn to the instrumental tune “Dynamic Exhilarator” that is just a super jam fest of sorts and left me standing there with my jaw wide open in downright incredulity. By far though the song that is my favorite on the disc would have to be “Turning Point.” I have always enjoyed Dug Pinnick’s work with Kings X and his performance on this disc is just as I would have expected, impressive.

I would be remiss not to mention the track, “Theme From An Imaginary Sci Fi,” it is driven by classic Billy Sheehan bass lines and reminded me of why I first began listening to him decades ago. At the end of the day Holy Cow! is a fantastic collection of songs that are a genuine thrill ride from beginning to end. Check this disc out, you will not be disappointed.  [ END ]