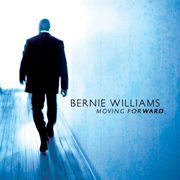 Who would have thought that after baseball, New York Yankees great Bernie Williams would carve himself out a career in the music business. Well that is exactly what he has done. Bernie has put together a nothing less than stellar collection of classic guitar tunes that prove he not only is an accomplished baseball player on the diamond but he is also an amazingly accomplished guitar player as well.

Most of the disc is comprised of extremely well produced instrumental tracks with Bernie tastefully tearing up the fret board. There are some other interesting tidbits on Moving Forward as well. A duet with Jon Secada, (“Just Another Day”), as well as a live recording of Bernie jamming with Bruce Springsteen and The East Street Band on “Glory Days.” Of course this disc would not be complete without a rendition of “Take Me Out To The Ballgame,” a song that I am sure is close to Bernie’s heart and one that even after all those years of listening to he has reworked so that is sounds fresh and invigorating.

Not only is Bernie’s playing fantastic but so is the list of well-known and accomplished session players that have contributed to the project as well. Bassists Abraham Laboriel and T-Bone Wolk, drummers Dave Weckl and Kenny Aronoff, and vocalists Jon Secada and Bruce Springsteen have all lent their talents to this CD making it a quite spectacular disc.

This is the perfect CD for chilling out after a hard day at the office; it is tranquil and refreshing and is perfect for those quieter moments of reflection and relaxation. If you are a fan of great music, Moving Forward is a must have. I truly enjoyed this disc. Do yourself a favor check this CD, you will not regret it.  [ END ]