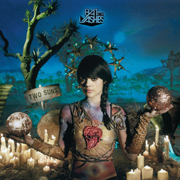 And no, it’s not raining today! It’s a bright and breezy Sunday afternoon here in Britain. The television screen might be flickering in front of me – but guess what? I’m tuning in to a brand new album. Let us welcome an upcoming and truly British artist to the airwaves – Natasha Khan, also known as Bat for Lashes (with her band).

Okay, she’s a little bit crazy… she wears glitter all over her face and a thick, cute dark fringe. She plays the guitar, sings with a wispy voice, and wears funky lace body-suits and gloves. No-one’s complaining readers, because it’s so very British. Perhaps Britain is imagined as a rainy country, where all we do is sip tea, but in actuality it has possibly one of the most active and exciting music scenes.

Diverse and organic, it is no wonder that Bat for Lashes has come into existence. I am listening to her newest album Two Suns, released on the 6th of April here in the UK. I can taste echoes of Fleetwood Mac, as well as modern flavours from Jeff Buckley in “Peace of Mind”, and an electro feel in “Pearl’s Dream”. It’s a wonderful combination which is truly great for chilling out to.

So why am I recommending this album as my album of the week? For me, it’s because of that British streak that you can’t remove. It’s something a bit different to the average mainstream pop-band, a handwritten piece of art that is moulded out of intelligence, talent and imagination. I certainly could never dream of making such a distinct sound, but it defines Natasha so well. In fact, surprisingly well. I admit when I first saw her on the television she seemed like another Lady Gaga type, but when you look past her electro persona you can imagine this hippy soft type. It’s a lovely addition to hear her English accent in “Good Love”, as we listen to her heart catching fire. So full of imagery, it captures a listener.

I would listen to this album on a late evening, with an alcoholic beverage, and the windows open in the summer. Maybe it suits an early morning stroll. Or when you’re feeling tired of your usual iPod music, and want a little more diversity. Indie runs through her veins. Over my next articles you will probably notice I like a bit of diversity – but most of all I love indie music! That means anything that’s a bit different, and I am usually a fan. Yes, even a bit of mainstream too, but you can’t fault me for that! Anyway, I recommend this album to fellow bloggers, listeners and British fans, enjoy. To the max.  [ END ]