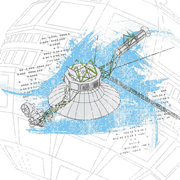 “Ignitition, sequence, start” begins “Center of Gravity”, the first song on Above The Atmosphere. This is Army of Freshmen’s fourth album, and undoubtedly the best. And the opening is right on key; this is a rocket of a record. Seriously.

From Ventura CA, the Freshmen have surprisingly escaped the attraction of major players in the music industry despite a rigorous touring schedule, including the so-called Get Happy Tour which they co-founded with pop-punk legends Bowling for Soup. The Get Happy Tour has achieved success on both sides of the Atlantic, even pulling crowds of up to 4,000 per show in the UK.

On earlier records, frontman Chris Jay took on a rap-style vocal, but Above The Atmosphere perhaps sees him delving into his more traditional side and sings most of his parts. More vocals and harmonies are provided by Aaron Golberg (guitar) and Owen Bucey (keyboard). Bassist Kai Dodson and Mike Milligan on drums lay down the rhythm section. What’s interesting about the band lineup is that they also have a second keyboard player, Dan Clark, who rocks a Moog synthesizer. It might sound odd to have two keyboards in a band but the sounds compliment each other perfectly.

What I love about this record is that it manages to capture the energy of the songs so well. I’ll be completely honest and say that on the first listen I wasn’t sold. There didn’t appear to be any one thing that jumped out at me. But then on the second listen I realised that was probably because every song is as good as the one before it. From the singalong chorus of “Condition Christine” to the obligatory woah-oh-oohs of “Any Other Way”, it’s a complete joy to listen to.

Army of Freshmen have proved that the era of the major record label is over. For over ten years, they’ve worked hard, perfected their craft and independently produced a great few records, and Above The Atmosphere is, as far as I’m concerned, an absolutely incredible selection of songs. Even if you’re not a fan of pop-punk as a genre, I urge you to give it a listen.  [ END ]