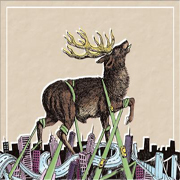 Arietta are a 6 piece band hailing from Toronto, Canada. They are essentially a straight out alternative rock band with overlapping hints of pop genius. They may have a few more band members than your typical rock group but there is no indication that there are too many people or too many sounds. In other words, the music isn’t lost in a muddled and chaotic mess, it’s fits into place very well.

Myself, living in Scotland, unsurprisingly know extremely little about the Toronto music scene. However, what is surprising is how a young band, thousands of miles away can produce something so good that it makes me smile, thinking “this is the catchiest song I’ve heard all year”. “Old Habits Die Young”, the album opener is by far the best rock song I have heard from any artist in 2009.

Fair enough, they have a catchy song, so what? It’s an album after all, what is the rest of the material like? Well, if I’m completely honest, it’s superb. When you walk around, hearing drips and drabs of commercial radio when you’re just quietly getting on with your daily chores of life, you forget how many young and exciting bands are just ignored, all over the world.

Arietta have some great diversity on this record, the songs aren’t all hard rockin’ songs, there are a few slower gems such as “I’m Going Overboard, I’m Taking My Final Bow'” However, when Arietta rock hard, it’s clear that this is where they are at their best. It’s great to listen to, it’s fast and more importantly in this day and age, is the pop hooks that are flying about pinging from ear to ear.

With all but two songs over 4 minutes long, these guys don’t seem to be too concerned about producing short and quick hit singles but just focus on writing good songs, which is refreshing. The band are young, but their music is more mature than you envisage it to be. The lyrics are very good and above the level of similar bands and the instrument playing is of a higher level than most in their genre.

Arietta, are young, fresh and exciting. Sure it’s not a life changing album nor is it completely different to anything you’ve heard before, but it’s still a very important record. Arietta are just one of the many young bands out there, that aren’t given enough coverage. I urge you to help put an end to this and pick up Migration, Arietta’s first long play, on April 28th.  [ END ]