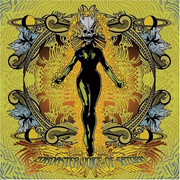 Hailing from Atlanta, Georgia and dubbed as the city’s loudest band, Zoroaster have just released their latest CD Voice of Saturn. Their Myspace page describes their sound as “A Dinosaur taking a shit” and their sound can be compared to something along the lines of the early Melvins meets Pink Floyd and The Grateful Dead; lots of psychedelic overtones mixed with a jam band feel to them, (some of their songs are over 13 minutes long).

I would best describe the sound of Zoroaster as Doom Metal. It is inexorably heavy, distorted and experimental at the same time. Even though some of the songs are extremely long I did not find myself getting bored in the slightest bit. I believe that is mainly because the band includes a bit of variety in their writing and the psychedelic aspect leaves you unaware of what is around the next measure or beat.

Sure songs like “Spirit Molecule”, ( which is driven by a super-distorted bass line that reminded me of the first Black Sabbath Album) are really long and one might say avant-garde, but I found it refreshing that someone is willing to take a chance and step outside the box to create something fresh and new and different.

While I compared Zoroaster to the Melvins and Black Sabbath I really did them no justice because even though there are elements and influences from both of these bands. I really do not know any way to categorize these guys other than to say that they are heavy and well… out there.

I really dig this disc, mainly for the fact that it is different from everything else going on in metal right now. If you truly want to hear something out of the ordinary check out Voice Of Saturn; it will be well worth your while.  [ END ]