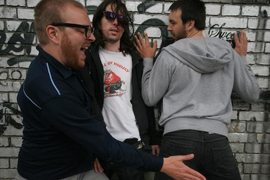 You can always enjoy a band that blogs, but what is even more amazing is when these very blogs are utterly random. Norwegian-based band Undomsuken, are possibly the most random bloggers on the face of this earth; you have to see it to believe it, so check it out here. The group take to their blog to enlighten fans on not only the random happenings of life (especially their lives), but also about their music. Sure their instruments may be more than “beloved”, but when it comes to music talk, their hot new LP Bisexual is all the rage – and one album not to miss out on.

Most bands from across the pond change their names to sound English. This band on the other hand, overtly original just like their music and their unique way of blogging, chose not to. Their barely pronounceable name instead can be broken down as such: “ungdom” means youth and “skulen” means school. It pretty much means high school; you know the joyous time where kids start to become adults, that troubling time where they try to “find themselves”!? That at least and acne, angst, teenage pregnancy and a plethora of other nonsensical “issues.”

Undomskulen is a Norwegian trio made up of Frode Flatland, Kristian Stockhaus, and Øyvind Solheim. Having been friends since 1999, the trio decided to take their love for life, and fondness for music one step further. After several name changes (how they settled on this one is still baffling), the band decided to give music a full time shot. Conceived technically in 2004, the band have worked hard and fast, having just released their latest effort and sophomore album, Bisexual. With notably unique album art that people seem to like, there fortunately remains even more chatter about their album and tunes. Recorded in a swift two weeks the quality is so grand that you would have never known that their equally unique and true-to-themselves rehearsal space had tragically burned down just before. With tunes that run long, but never too far, the album is solid, pure, new wave, prog rock.

Okay, so you are probably thinking rehearsal spaces are replaceable, so stop whining… not in this case. Picture this, a rectangular room, an old fisherman’s lodge, and probably cozy enough just to house a drum kit, bass, guitar, mic stands and a few amps, perfectly decked out with exotic posters, and lest we forget a fridge. Sure it sounds claustrophobic, but for these guys, this is their unique space and it worked. Here is where the band gets together, three times a week, and jams for 5 to 6 hours. Here’s the kicker, just outside lays the fjord where they can take a dive and land into the salty sea. Alas, it was not meant to be because as I mentioned before… it burned down.

Yes this article is random, but so is this band, their blog and their music. What is NOT random however, is the sheer awesomeness of their original sound. The music is Undomskulen. The album is Bisexual. Go check it out!  [ END ]