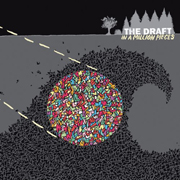 I like Hot Water Music – maybe not as much as the average “true punk” fan (perhaps my most sarcastic use of quotation marks to date) – but still, I’ll put on No Division from time to time and certainly respect what they’ve done for melodic punk rock. Truth be told, though, and I may receive a bit of slack for the assertion, I think I just might like The Draft a little bit better.

Carrying the three members of Hot Water Music that aren’t Chuck Ragan, it’d be impossible to write a review of The Draft’s In A Million Pieces without mentioning the band from which they spawned. Still, we could technically end it there, as even though Chris Wollard fronts this band, giving the vocals a similar timbre to about half of HWM’s output, The Draft does a great job of establishing themselves as a separate musical entity entirely.

The album is much more blue-collar than HWM’s earlier output, and that’s actually a good thing. What we get is some very straight-ahead rock and roll with a punk tinge to it, and not the other way around. The songs are a bit more linear in nature, which allow Wollard’s melodies and narratives to push forward a little stronger. There’s also a less serious nature to this band, which also contributes to the laid-back listening experience offered here.

A few tracks carry HWM elements more prominently than others, with the melodies picking intensity and the lead and rhythm guitars being pulled further towards their respective poles. Still, there’s always a simple and driving rhythm behind the songs that keep the simplicity at the forefront. Wollard’s vocals do well on their own, and are rarely backed up with additional layers. The album is surprisingly better for it.

There’s not much else to be said. This is a good meat-and-potatoes rock album that certainly doesn’t push any boundaries, per se, but that doesn’t really matter when you can deliver something this solid. An enjoyable listen from start to finish, I’ll be looking forward to more.  [ END ]