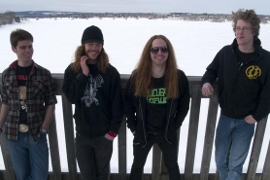 Although maybe not a typical hotbed for powerful heavy metal music, one of the heaviest bands around these days is Rusted Dawn from New Brunswick. Although still very young, the band has been together for five years now and have already released two EPs, with a debut record on the way very soon. The album will be called The Black Tides of War and as of now, it’s tentatively scheduled for a May 2009 release. The group just completed yet another Canadian tour that brought them through parts of Quebec and Ontario. Being no strangers to the road, look for Rusted Dawn to be out on tour for the rest of the year and into next year touring behind The Black Tides of War. We recently spoke to the band’s lead singer Jeremy Goddard to learn a little bit about the band, where they came from and what they’re all about.

You’re just wrapping up already your fourth tour of Eastern Canada. What’s the tour been like? Are you pleased with how things have gone?
Jeremy: This tour has been great! The only downside is we’ve all been sick this entire time, and I’m not gonna act like some super-tough dude and say that being ill doesn’t throw a wrench in my gears, ’cause it’s a total buzzkill. But other than that, it’s been a blast everywhere we’ve gone.

The band hails from Eastern Canada, specifically New Brunswick where I wouldn’t expect there to be a strong thrash metal scene going on. What is the scene like there? Are you guys a one of a kind band out there?
Jeremy: As far as thrash/crossover kinda stuff goes, we’re pretty much holding it down single-handedly in NB. Unless of course there are some basement thrashers that have gone under the radar that I’m not aware of! As for the scene we are pretty well supported in New Brunswick, especially in our usual stomping grounds of Fredericton and Sussex.

You’ve been together now a few years, but how did the members of the band all meet?
Jeremy: Justin and I are brothers, so we kinda met whenever you start remembering stuff from around age 4 or whenever. Chad and I went to high school together and played hockey together. I didn’t meet Luke until we had all moved to Fredericton where I met him through some dudes I knew from back home who were attending UNB.

Who would you consider your greatest musical influences? What bands would you say really have influenced Rusted Dawn’s sound and style?
Jeremy: I can’t speak on behalf of the entire band, ’cause we’d all have drastically different answers to this question. But for me, some of the bands that have been a big influence to me and to how I write would be bands like Nuclear Assault, Arise-era Sepultura, Disfear, Napalm Death… the list goes on.

Your debut full-length album titled The Black Tides of War is due out sometime later this year. How has the writing and recording been going so far? Do you have a release date set yet?
Jeremy: The writing has been long finished as well as the recording; we are currently mixing the album. As for a release date, we aren’t setting anything specific as we don’t want to rush anything (not to mention we are horrible at meeting deadlines). We hope to have the album released in May before we hit the road if all goes well.

Where did you get this title The Black Tides of War? What is the meaning behind the title?
Jeremy: The title “The Black Tides of War” is a bit of a take on Orwell’s idea of endless war, something I think we are quickly approaching. Our modern conflicts are like waves on a shore; they recede momentarily but always return. As far as the colour black, I guess that’s just pretty metal.

Even though you’re getting set to release your first full-length, you’ve already put out two EPs: The Toxic Shock EP and The Red Collar EP. What would you say is maybe different about your debut album in comparison to the two EPs?
Jeremy: First off, the production is LIGHTYEARS beyond anything we’ve done before. We rented the ESN auditorium in Bathurst, New Brunswick, made a makeshift studio there, and everything sounds huge. And as far as the new material goes, there are some very, very crushing sections to compliment all the speed we normally use. Also, the blast factor has been upped substantially.

Is any material from the two EPs going to appear on the new album? Or is it all going to be new and original material?
Jeremy: We chose a small number of choice cuts from the older material to use on the album, but for the most part it is all new material.

What’s the process of writing and recording like for the band? Do you all get together and write or do you bring individual ideas into the studio and then put them together?
Jeremy: Justin and I usually come up with a shit ton of riffs, then create a structure for them, we then show Chad the riffs, work in some basslines, and then we bring everything we got to Luke, chart it out, throw around some different beats behind everything till we find what we like, and by the time that happens we’ve probably found even more riff variations so we work those in as well. Lyrics come last once I work in parts that I’m able to sing over.

What’s next for Rusted Dawn? What does the band have in store for the near future?
Jeremy: We plan to tour across Canada for the first time in May, and repeat the effort later on in the summer. Also, get this friggin’ album finished up and mastered. Hopefully by then we can get on some bigger tours with some other hard working bands and really start to leave our mark.