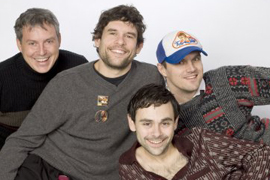 As one would expect from a band with a name that is a combination of Propaganda and Gandhi, these guys have a lot to say. By combining the issues they are passionate about with some heavy tunes, the band has created their own brand of music infused with serious meaning. Recently bassist & vocalist Todd “The Rod” Kowalski took some time to answer a few questions for PureGrainAudio about the band, their influence and some of the issues that are on his mind.

Every band has its musical influences. What are some of the other bands and artists that have greatly influenced you guys and your music?
Todd: My very first influence was Kiss, then Judas Priest, then Dio, then speed metal bands like Venom, Celtic Frost and Exciter. Then came DEATH, Razor, and punk bands like MDC, and even the Exploited. Since then it’s been all sorts of heavy and fast bands and also a lot of African music like Salif Keita and Gigi Shebawbaw, etc…

If you could jam with any famous musician, dead or alive, from any century, who would it be and why?
Todd: Maybe Sonny Terry. As in The little blind guy who liked to “Whoop” from Sonny and Browny. I’d love to have him whooping along to my tunes.

The name of the band Propagahndi is interesting to say the least and sounds as if there is a story behind it. Where did the name come from and what is the story?
Todd: The name is an amalgamation of Prpaganda and the name Gandhi. It is sort of peace propaganda. I suppose.

What was the writing process like for this CD, Supporting Caste? Did you guys all write together? How long did it take?
Todd: Yeah, we are always jamming together n the basement and together. We go in different little combinations sometimes. Jord and I will practice together, or Beave and I. Beave and Chris, Chris and Jord etc… It took a while to get everything together. We just play and play until we like what we hear.

How has MySpace and the internet impacted your band and do you think downloading helps or hinders the artists?
Todd: It all has its ups and downs. I guess a lot of people hear us who might not have otherwise, which is really good. I do find that having everybody get the music without the lyrics and paintings and all that we try to include is a little disappointing. Nothing I can do about that though. So, I will say it is all right. It is an impossible current if you were to try to swim against it. That is for sure.

Tell me about a book or two that you have read that you think other people should read? Why?
Todd: Right now I am reading, “All Things must fight To Live” It is about the war in Congo. It is important because that is the biggest war since World War 2 and there have been 5 million people killed there. For some reason it is not hot on the radar for activists and politicians. I find that extremely disheartening and disappointing. There are many, many western companies involved. The other one I would recommend is “A Long Way Gone” written by Ishmael Beah, a former child soldier from Sierra Leone. It is important because there are thousands of kids living that nightmare right now.

What has been the most memorable moment of your career so far?
Todd: Oh, I do not know. Probably the best moments are when you are really feeling a particular song at a certain time.

Are there any tracks on Supporting Caste that have a good story behind them or are personal favorites?
Todd: I worked so hard on the song “Night Letter” It means a lot to me and stands out as a favorite. I am into all the songs on the record. We tried our best, for sure.

What does the future hold for you guys as a band?
Todd: More shows. I hope that we will continue to play good shows make decent songs and help out some more good organizations or peak people’s interest in checking out a few worthwhile ideas.  [ END ]