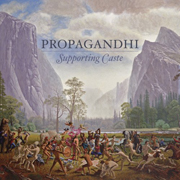 “Rebellious” is by no means a trait you’d stereotypically associate with Canadians, but with Supporting Caste, the against-the-grain attitude of the prairies’ most notorious punks storms back into the limelight (smashing some of those stereotypes along the way).

Propagandhi’s latest full-length since 2005 is full of the same spiteful vigour loaded into all of those before it, though the album as a whole is arguably the best output from the band this decade. One of Propagandhi’s strengths as a band has always been their ability to combine the spit-in-your-face swagger of punk rock with some breakneck pacing and surprisingly technical instrumentals usually ignored by their contemporaries.

The record kicks off with “Night Letters,” which thankfully wastes no time delivering a does of unfiltered angst via some really metal-influenced guitar leads and gutsy shouts from Todd Kowalski. The intensity doesn’t let up over the next few tracks, with Chris Hannah taking back the mic for vocal duties. “Supporting Caste” sees Hannah wrestling with the barbarities of history, while subsequent tracks find him dipping back into the familiar topics of religion and war.

The album arguably hits its high point with “Dear Coach’s Corner,” featuring a dizzying whirlwind of an opening guitar lead setting up Hannah for a settled, sing-able verse that finds him discussing militant politics against the seemingly innocent backdrop of hockey. The combination of the overdriven sticato licks with Hannah’s surprisingly smooth vocals make this track a real standout.

Its climax passed, the album certain doesn’t let up any intensity, keeping up with both the technical and aggressive guitar work and socially-aware lyricism. While at times, perhaps most evident in a track like “Human(e) Meat,” Hannah is a tad overindulgent with his message, although the fact that he has one at all and makes his conviction both clear and consistent lets it pass. Let’s face it – it’s nice to have some punk ideals injected back into punk rock.

With “Last Will & Testament,” an ambitious track with a steady instrumental build-up to one final blast of aggression, the record concludes in a similar fashion as it began (save for the secret song). Short but savage, Propagandhi once again proves that on top of a fuck-you attitude, a great punk record is allowed to be well produced and technically proficient, too.  [ END ]