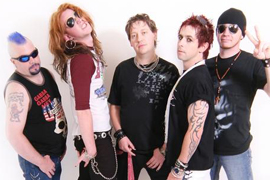 Hard Rockers Million Dollar Reload will be releasing their newest disc, Anthems Of A Degenration, on March 24th, 2009. The record is pure rock and roll with no gimmicks and proves that these guys can rock with the best of them. Catchy melodies and rock sensibilities combined with lots of anthemic choruses make this a very enjoyable CD. Lead singer Phil Conalane and lead guitarist Andy Mack took a moment out of their busy schedule to answer a few questions for PureGrainAudio.

The name of the band Million Dollar Reload is interesting to say the least and sounds as if there is a story behind it. Where did the name come from and what is the story?
Phil: The name of the band comes from the poker card game Texas Hold ‘Em. Some of the guys in the band are card players especially me and I am quite interested in the skills, strategies and mathematics used in poker. In poker, some tournaments have what you call a re-buy period or reload, a period of time in which a player has an opportunity to stay participating in the tournament for a certain amount of money. A “million dollar reload” is a mythical reload amount. If you had a million dollar reload you would win every tournament. Hence, there is no such thing as a “million dollar reload.”

Your brand new CD titled Anthems Of A Degeneration has been released; now that it is complete how do you feel about it? Are you satisfied with the outcome?
Phil: We feel good about it. It turned out they way we wanted it – a good time rock n roll record.

Andy: “Anthems” is a really fantastic record – you can just turn it on and enjoy it. It is 15 tracks long and each track is has strong riffs and anthemic choruses. It is receiving critical acclaim worldwide and will be released in the US through Koch Records on 24th March 2009.

What was the writing process like for this CD? Did you guys all write together? How long did it take?
Phil: The writing process for this record was relatively quick, a couple of months and recorded it over a period of 3 weeks. We all knew what we wanted the record to sound like before we had written it. The song writing was all quite natural to us. We are all heavily influenced by bands such as Aerosmith, Guns N Roses, AC/DC, Skid Row, etc. So having those bands to aspire to, the song writing within M$R would obviously lend itself to those bands. Our songs are usually written in two processes. Somebody in the band will bring a piece of or a completed song to rehearsals. It usually is pretty structured with lyrics and melodies, even at that stage. No one really feels comfortable presenting music to the other guys unless it is pretty much finished, or at least with definite ideas for the song. The second strand to the process is, when the initial song has been played to the rest of the band by the person who brought it in, the other guys will put their own spin on things. Songs will often sound completely different from what they started out, once the rest of the band work on it. Having said that, collectively we always do what is best for the song.

What can fans expect when they pick up a copy of Anthems Of A Degeneration?
Phil: Ball busting, fist in the air, sweaty, beer drinking, cigarette smokin, anthemic, good time rock n roll!

Andy: Hopefully they will listen to it and conclude that it is the most important hard rock album in 20 years – that is what we set out to do.

How has MySpace and the internet affected your band and do you think downloading helps or hinders the artists?
Andy: It definitely helps. It is like an online business card or electronic press pack. Industry people can find out all about you, hear your songs, see your image and see how big your profile is in a few minutes. We use our MySpace page exactly to achieve all these things but we can also keep in constant communication with our fans and also expand our fan base. MySpace has become an essential tool to all bands and musicians, so use it wisely. It has also killed the need for a band website.

When you are on the road for a while, I am sure you see and experience many different things you might not even have known existed. Are there any stories that stand out in your mind as being exceptionally strange or odd?
Andy: The whole idea of spending 8-12 months on a tour bus is the oddest thing I can think of! What you do learn very quickly is to seize every opportunity to have a hot meal and hot shower! Touring is one of the best experiences any band could have but sometimes you need time away from each other and so you go and have a lie down in your bunk.

We have all heard the stories about back stage antics and groupies. Is there any truth to those stories and if so do you have any outrageous stories or tales that you would care to share?
Andy: Those stories are very true but there is the “Code of the Road” that must be adhered to at all times, so to protect any guilty parties I think it’s best not to share any stories – I’ll leave those for my autobiography!

What does the future hold for you guys as a band?
Phil: Constant touring, make more albums, play to as many people possible in as many different countries as possible. As long as people still want to hear our music and see us play, we will continue to do just that.

Andy: I think it would be a crime for the world not to hear Million Dollar Reload. I think we have something to offer everyone. We have lots of new material written but unrecorded and once we have toured “Anthems” into the ground, we will start work on album two. Until then, we will continue to work hard on all aspects and in doing so we hope to play every country we can and bring our music to the masses.  [ END ]