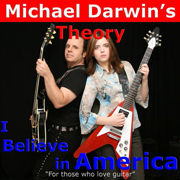 “You may be for the war. You may be against the war/But whatever side you’re on the men and women who serve are paying the ultimate price. Their blood. I’m Alive was written for, and is dedicated to, those who serve and have served, their families, and their friends.”

These are the words written in the liner notes from Michael Darwin’s Theory’s latest release, I Believe In America. As the title suggests this disc is a series of tunes that are written for and about the numerous problems that America is facing. The catch here the album is written by a Canadian Michael Darwin and his daughter Sophie, (who also shares the guitar playing with her dad).

With lyrics such as, “Well some folks say if she would have been kinder/America’s best wouldn’t be behind her/The economy’s bad and the war’s raging on/Our enemies think that we isn’t no longer strong/Well I got some news for you my friend/America’s down but this isn’t the end/We’re standing up together for the strong and true/Sing a little song about the red, white, and blue,” this is truly a noble endeavor. Honestly these are troubled times and if this Canadian Father/Daughter team is offering up an olive branch and standing in support of their neighbors to the south than I think it should be applauded wholeheartedly.

The songs on I Believe In America are decent and the vocals are average but where this disc shines is in the guitar playing, these family members can shred like nobody’s business. Each song is laced with great riffs and infused with fantastic solos that are sure to impress. My personal favorite is the tune “Sparkle Jet,” for the simple fact that the guitar solo in it is stellar, I am not sure who is doing the shredding here in this song, as I believe they both take turns, but whoever it is smoking.

On the down side, the production here leaves a lot to be desired. Everything is drowned in great big reverb and sounds as if quite possibly it is a self-produced self-recorded venture. Nonetheless, in the spirit of brotherly love with which this was written, check these guys out. I dig what they are about. If there were more people like this duo, the world just might be a much better place.  [ END ]