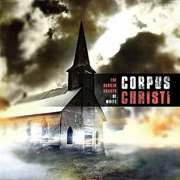 Every so often I find myself in a bit of a quandary. For the most part I am not the biggest fan of super extreme music, in fact if you read my past reviews you will notice a sort of trend, so to speak. Most extreme music seems to me to be extreme for the sake of shock or simply to see how far the limits can be pushed while the product can still be called music. Most often, in my ever so humble opinion, this is not a successful venture and the disc ends up being unlistenable.

I said all this to say the newest release from Corpus Christi is an exception to my rule. The Darker Shades Of White is a full-on aural assault that really hits you like a ton of bricks. However, by adding cleaner vocals as well as melodic and harmonic guitar parts interspersed throughout the musical chaos, the band really keeps things interesting and fresh. Although it may be the only key thing that sets them apart from the rest of the modern extreme metal pack, the band’s decision to add those elements into their songs makes them impressive and memorable.

I am not sure what the real reason I dig this record is because as I said, it does contradict some of my previous reviews where I have been very hard and critical of other bands of the same genre. Nevertheless, just like I cannot explain why I like a certain flavor of ice cream, (vanilla in my case), I really like this CD. I am a sucker for big, yet tightly-produced records and The Darker Shades Of White most definitely is well produced.

Some of my favorite tracks on this disc are “Baptized By Fire,” “Until The Day” and “Starry Nights, Cloudy Hearts,” all of which are very good examples of just how Corpus Christi is attempting differentiate themselves from the rest of the pack.

I would recommend this disc with no reservations to fans not only of the extreme metal genre, but also to fans of metal in general. I feel that The Darker Shade Of White goes along way to bridging the gap between these to styles of music seamlessly.  [ END ]