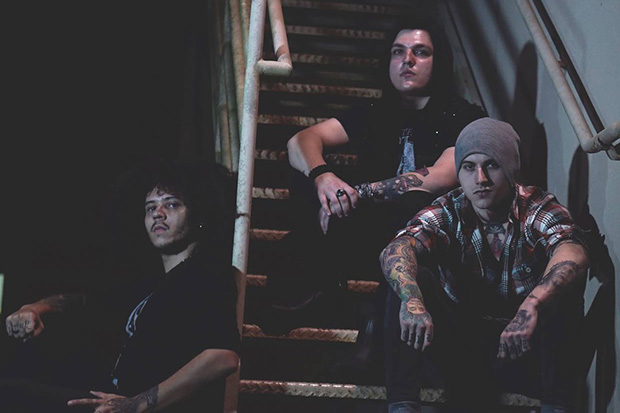 Black Tide: “Backstage with the Band”

Black Tide & Escape The Fate (02.25.2009). Being in this business we get to meet and party with a lot of bands, known and unknown, “Backstage” is a journal entry for these usually event-filled encounters. If you have an awesome story of an encounter with a band, send your story to mail@puregrainaudio.com and you could see it posted right here on “Backstage”! So be sure to check back and see what happens when PureGrainAudio goes Backstage!

My night started out with an interview with Black Tide at the Opera House which I was right on time for, my timing could not have been more perfect. We went downstairs to the backstage area and after exchanging a few laughs and tossing out a couple “That’s what she said” jokes Zakk and Gabe went up stairs to set up. I was packing up as I was leaving the room we were in and saw Max, bassist from Escape The Fate, sitting on a chair. I asked if he wanted to do an interview really quick, he agreed so I proceeded to get my voice recorder back out of my bag.

Before I could get my recorder out, Raul, the tour manager came downstairs, and asked if I smoked pot, you can guess my answer. We all decided to smoke some before the show and I asked Max what he would rather do first, the interview or blaze. His response implied that there would be no way he could do the interview high. So we did the interview which went well and then I managed to get a lot of my suspicions confirmed. I’ve been waiting to see and interview Escape The Fate since 2006, needless to say this was already a good night.

I put my stuff away and Max and I began to converse about touring and how boring the hours before the doors open can be. We could hear Black Tide doing their sound check and we both commented on how good they are. He explained how some of the songs were written when a couple of the guys were around 10-years-old, how astonishing is that? They finished their sound check and came back downstairs. We all hung out and watched Power Rangers (the original) and some South Park. The guys made fun of the way I say “about” and “so sorry”, go Canadian accent! At least everyone had a laugh at my shirt which just simply says “Spencer” prominently displayed across the chest.

We were all drinking the free beer that the venue had provided us with, Canadian of course, and I questioned what was happening with regards to the smoking of a certain substance. Not missing a beat, Austin, guitarist for Black Tide, and I went outside and ducked in an alley way to smoke a couple bowls. A couple girls had heard him mention that he was cold while we were walking by and came over to talk and keep him warm. We finished, said bye to the girls and went back inside where Austin showed off his ability to stiffen his right hand to make it look fake in attempt to trip me out, which it did for all of 3 seconds. He threw some lunch meat against the wall (where it stayed for at least an hour) and we killed ourselves laughing. After we all watched the Christmas in Canada episode of South Park, Zakk and I went up to the balcony to grab a drink. I had to run back downstairs to grab my ID out of my bag and told him I’d meet him up there, so I quickly made my way through the sold-out-crowd like George Costanza in a fire, grabbed my ID and went back to the balcony.

On the balcony, I ordered my usual double-rum and coke in a short glass. I took a glance around the room for Zakk and saw him making his way over out of the conversation he was having. Turns out the guys he was talking to didn’t recognize him and they were telling him how much Black Tide sucked. I yelled out, “Yeah, Black Tide sucks!” as not to blow his cover and we knew that hilarity would ensue once they saw him on stage, though we didn’t see them for the rest of the show. We finished our drinks and went back downstairs, we checked out the opening band from behind the stage. Before the end of the set we both went back stairs and hung out for a bit before Black Tide hit the stage.

A few minutes passed and it was time for Black Tide’s set. The guys got ready, did their entrance and I watched from the right wing of the stage. I had planned to do a stage dive during their 4th song however felt their would be too many 13-year-old girl casualties and didn’t want to face the inevitable lawsuit which would follow, not to mention there wasn’t all that much room to leap from. The guys had a wicked set and all the girls were screaming. They have pretty good stage presence I was glad they didn’t just stand around playing their instruments.

Black Tide’s set ended and I congratulated them on an awesome performance. I then proceeded to the merch table where Raul was holding down the fort. We hung out for a bit during ETF’s set and the guys from Black Tide slowly began to make their way up to the table after they finished loading out.

ETF finished their set and everyone in the crowd began to make their way out of the venue, but not before stopping by the merch tables to get at least a piece of the bands. I offered my services as I could see Raul was super busy, and slipped a few of the fliers for PureGrain into the hands of their fans. I even got to sign a few t-shirts though I told those asking that I wasn’t in the band, it was awesome nonetheless.

Finally everyone was out of the venue and we all went outside and began to smoke an, er, we’ll say cigar for the sake of this conversation. We began to party on the ETF tour bus until it was time to find a place to park. We then hopped in the van and followed the bus in attempt to find someplace to park for the night, the ETF tour bus driver found a spot and a few of us hopped out of the van and back onto the tour bus.

The night was filled with hilarious incidents, such as Raul telling me that I was his date for the night, and the events surrounding one of the girls who joined our party and a certain crew member. Basically her friend was getting really annoyed and annoying us, eventually she gave up on her friend, who was in bed at the time, and just left. After awhile we moved away from the front of the bus and were hanging out in the backroom of the bus. I looked out to see what all the commotion was about in the bunk area and as I was watching the girl, whom I had just mentioned, fell out of the top bunk, buck naked, onto the floor. Embarrassed, she crawled into the bottom bunk and waited for the laughter to stop. Craig from ETF stepped up and got the crew member, whose name I’m holding back, to hand him her clothes to give to her. She got dressed and came into the back room and we tried to get a hold of her friend who had stormed off the bus earlier.

At first one of the girls tried to talk to her friend with no luck. Craig, again stepping up to the challenge, made a hilarious attempt at reasoning with her friend by first disguising himself as a police officer and then, on the second attempt, he left a voice message as “Officer Rick Moranis”.

We hung out for a bit longer, but it was almost 5:30am and I was totally burnt out so I left after taking a quick look around for my knapsack, which I couldn’t find, and made my way to the west-end of the city where my apartment is. I had to call in sick to work as I was supposed to start at 8am and there was no way I would be in any condition to handle all of the stupidity and orange walls within the confines of The Home Depot.

It was a truly awesome and fun-filled night other then the fact that I lost my backpack. I can only hope that my managers never read this so that I can keep my job. I’ll let you know how that turns out.