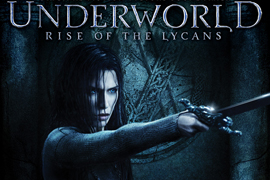 Brief Bio: Lakeshore Records will release the soundtrack for UNDERWORLD: RISE OF THE LYCANS available digitally (iTunes and Amazon Digital) and in stores on January 13, 2009. The film is the prequel to the 2003 film Underworld and its 2006 sequel Underworld: Evolution. Like the other two films in the series, the soundtrack for UNDERWORLD: RISE OF THE LYCANS boasts a top-notch lineup of rock, goth, and industrial acts remixed by the album’s producer, Danny Lohner. Lohner is a former member of Nine Inch Nails and has performed with many of the artists who appear on the soundtrack including Puscifer and Black Light Burns. As a remixer Lohner uses the moniker of Renholder (re d.lohner backwards).

Another familiar artist returns to the Underworld series. Puscifer — the alias of Tool and A Perfect Circle’s Maynard James Keenan, contributing the tune “Lighten Up Francis”. He also appears with Milla Jovovich on the Renholder remix of The Cure’s “Underneath The Stars”. Puscifer will be performing for the first time live at the Pearl Concert Theatre at the Palms Casino in Las Vegas, NV on February 13-15.  [ END ]

Prizing:
Three (3) lucky winners will each win an Underworld prize pack with 1 copy of the movie soundtrack and 1 wicked, high-gloss movie poster. What are you waiting for?