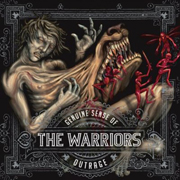 If any of you have heard The Warriors before, this album is a huge change to what they normally put out. Their earlier works were heavily influenced by Rage Against The Machine, and the vocals made that quite clear. The latest album, Genuine Sense of Outrage has less of that influence, and actually has vocals resembling those of Trevor Phipps of Unearth.

While the vocal switch is a huge change for the band, it is not a band change. The rougher vocals actually contribute to the bands hardcore side, while they still border of metal.

My personal favourite track on the disc is track ten, “Nothing Lasts”. The entire song is that of traditional hardcore: heavy, loud, and fast. There even seems to be a hint of Hatebreed influence in the instrumentation, but has more heart behind it. It is quite clear that the band spent a very large amount of time writing this album, due to the amount of emotion behind every track.

Victory Records could not have picked up a better hardcore band. As of late, hardcore has changed over time, but these guys bring back traditional hardcore, and they’re ready to take the world on.  [ END ]