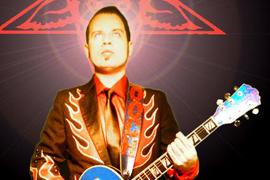 Brief Bio: Creators of the HORRORBILLY genre, masters of balls out rock, foremost motherfuckers in their own right THE MATADORS have been destroying stages and the minds of the youth since the mid 90s with their brand of lucifer driven,booze fueled hate rock. No band has ever come close to THE MATADORS is terms of live show and performance and no band has ever assembled 3 musicians with such raw and unfathomable talent before. Seeing THE MATADORS live is like being in a funhouse that has been set on fire,like being trapped in a womens prison on a full moon, and be prepared and bring a change of pants because you will shit the pants you bring to the show.  [ END ]

Prizing:
One (1) lucky fan will win a fee copy, of The Matador’s HOT new CD, Sweet Revenge. Who wants to win?