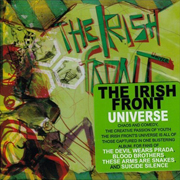 Well out of all the CDs I have ever reviewed I don’t think I ever found any band that is filled with as many surprises as The Irish Front. Universe happens to be the group’s first CD and is just a disk you will have to hear for yourself.

Now I’m pretty sure, that The Irish Front plays “Scenes From A Hat” when it comes to writing songs… take Job For A Cowboy, An Autopsy, Lady Gaga, Ludacris, that hot chick from Evanescence and Suicide Silence and get them to sing some Hip-Hop, Metalcore, Folk, Jazz, Experimental and a bunch of other randomness… stir it up in a hat and that’s the sound The Irish Front has to offer.

Now I say “scenes from a hat” because it is just randomly put together… yet it flows so well… it is a very catchy sound that just can’t be duplicated and well once again… I’m pretty sure The Irish Front cut up some phrases from the Urban Dictionary mixed them into a hat and pulled out random words to make there lyrics.

Take these sample lyrics from the song “Fire!!!”. “Your grandma makes, the best, chocolate chip cookies/She is in love with me/I’m the most disgusting person you will ever know/like blended baby panthers through a rusty garden hose/I found happiness in the lunch lady’s mustache!/Spit or swallow, there’s no time to chew/The tiny bits of meat in her flossy lip hair!/Its so sexual!!!/The tiny bits of meat in her flossy lip hair!/It makes me horny/Being polite is something I’ve always lacked,/I’d love to slide a card down the slit of every crack/To see if it would ring up credit debit or cash!”

Great songs on this CD are “Monsterbation” and “Fog Mouth” which is filled with many twists you just have to hear for yourself and beautiful female clean vocals. My personal favorite song on the whole record though is “Boom Snap Clap Snap (Rap)” which is like your average Metalcore song with breakdowns but than out of nowhere rap remixed and just by far the catchiest song I have heard in a while. Hands down the best line in the song is: “So they say diamonds are a girl’s best friend, well I got some jewels for you!” This is just a record you really have to judge for yourself; you will either love it or hate it. I personally love it and love the randomness of the lyrics. Now in the CD sleeve you may find it hard to read the lyrics, so go to thir MySpace to peep them more.