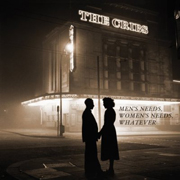 The Cribs, at the time of the release of Men’s Needs, Women’s Needs, Whatever, were a three piece band. However in recent months ex Smiths guitarist Johnny Marr officially joined the 3 brothers from Wakefield in England. The Cribs are a band with tantalising, catchy indie rock guitar riffs and melodies. Men’s Needs… is their third album and steps away from their more underground, rough sound. If the intention was to appeal to more of the general public, it certainly worked. There’s no doubt the songs are overall, better than any of their previous albums and the cleanness of the recording sound, produced by Alex Kapranos (Franz Ferdinand Singer) really has transformed The Cribs from not only a underground cult but also a popular modern rock band.

The record has no weak tracks and the quality of each song rarely dips below ‘great’. “Moving Pictures” is one of the highlights and no doubt an excellent choice for a single. The overall sound is a ‘twangy’ light sounding guitar scraping through each song with the solid and broad bass, cooperating in time with the simple but effective drums. A real treat, for me, on the album is the song “Be Safe”. A melodic bass riff creeps in and guest Lee Ranaldo (Lead Singer of Sonic Youth) leads the guest vocals and the song builds into a passionate, loud and euphoric classic that has Cribs fans singing word for word at every gig.

The penultimate song of the album “Ancient History” however, is just incredible and is a good shout for the best Cribs song to date. The song builds into a manic, crazy paced finish that will have everyone left thinking “wow”. I can only imagine how great it would be to see the song live. The drum switch from hi hat to the smash, back and forth, increases in tempo and the guitar and bass join in with the repeated shouts and just completes a mind blowing adventure. The final song is a calm “Shoot The Poets” and after you’ve calmed, there is no doubt you have to listen from the start of the disc all over again.

This album is loved by almost everyone who’s heard it. Still rough enough for the underground and melodic enough for the general public, this has got to be in the top 3 indie albums of 2007. The Cribs have got a scary amount of potential and who knows what will happen next with Johnny Marr as second guitarist.  [ END ]