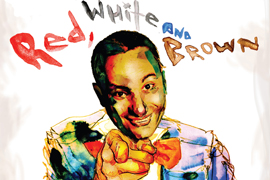 Brief Bio: Russell Peters is back in the all-new stand-up special, “Red, White And Brown.” With his perfect balance of sophisticated writing and physicality, it’s clear why Russell Peters is one of today’s most internationally respected comedians. Released via COMEDY CENTRAL Home Entertainment and Paramount Home Entertainment, “Russell Peters: Red, White And Brown” DVD and CD arrives in stores nationwide on Tuesday, January 27 and will also be available at http://shop.comedycentral.com. The “Russell Peters: Red, White And Brown” DVD is a new stand-up special that was taped at the WaMu Theatre at Madison Square Garden in New York City. Bonus materials include Feature Commentary by Russell Peters, Clayton Peters and Director Jigar Talati, deleted scenes, “Support the Troops” Bonus Feature with commentary and a “White Jacket Bootleg” segment with commentary and includes an audio version of the special on CD. Russell Peters is already a comedy superstar in much of the world. During a recent tour of Dubai, Peters sold tickets at the rate of one ticket every two seconds – crashing all the online sales outlets as soon as the tickets went on sale. In April 2005, Peters was the first South Asian to headline and sell out the Apollo Theatre in New York City.  [ END ]