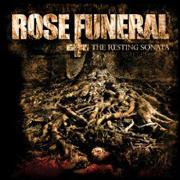 Cincinnati, Ohio’s Rose Funeral is preparing to release their Metal Blade Records debut, The Resting Sonata. Let me tell you something, this CD is a menacing masterpiece of pure destruction. This unbelievably heavy collection of tunes dishes out 42 minutes of punishing demonic mayhem and from the opening song, “Exordium The Fall Of Christ (Intro),” mass chaos soon follows. Evil, throat-ripping vocals are standard fare on this disc as are the customary guttural growls that are usually associated with the Death-Metal genre. The Resting Sonata is a mixture of unrelenting brutality but still manages to sustain a melodic sense about it.

“Buried Beneath” is the best song on the album by far, and features a blistering wall of guitars that will knock your socks off. The drumming prowess of Dusty Boles is the absolute highlight of this disc. The intensity of his skin pounding is unbelievably fast and well, pretty unreal.

The incorporation of ethereal, eerie, ill-omened synthesizers in “The Redeemer” is a welcome break from the auditory onslaught. But the relief does not last long, a short 1:41 minutes to be exact, and then the listener is clobbered with what is probably one of the heavier tunes on the record, “Created To Kill.”

Other tunes worth mentioning are the title track, “The Resting Sonata” which has a pretty good groove and “Left To Rot,” which I feel, is a classic Death Metal tune that is comparable to some of the masters. Rose Funeral is relatively new band on the scene and with the release of The Resting Sonata, they are proving that they are a force to be reckoned with in the Death Metal world. Keep your eye on these guys they are destined for bigger and better things.  [ END ]