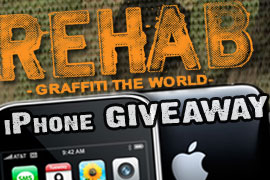 Rehab’s music is a mixture of southern rock, dirty south rap, reggae, alternative and the popular 90s rock/rap style (made famous by bands such as Limp Bizkit). Three pressed albums have been released: “To Whom It May Consume” (1999), “Southern Discomfort” (2000) and “Graffiti the World” (2005). Previously obtainable only online, “Cuz We Can” (2002) became available on CD in the early months of 2007. Following the release, Rehab had this to say, “Although this may not have been officially what the label intended to put out, it’s the best work we could find and put together as a comprehensive volume to give to the fans.” Rehab was originally formed as a trio: Steaknife, Danny Alexander, and Brooks Buford. Early on, they released their first album “To Whom It May Consume” produced by Steaknife and Brooks Buford. Soon after, Epic/Sony offered a record deal. Rehab’s major label debut, Southern Discomfort, hit stores in October 2000. With band members Danny Alexander and Brooks, hailing from the city of Warner Robins, south of Macon, Georgia (they dedicated a song to their hometown called “This Town”). Their debut album starts with a skit of them breaking out of a rehabilitation facility. The album went on to sell over 140,000 units, and produced such hits as “Sittin’ At A Bar”, “It Don’t Matter” (Modern Rock Top 20), “Rattle My Cage”, and featured such guests as Cee-Lo, Goodie Mob, Steaknife, and Cody Chestnutt.