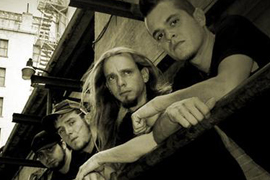 Brief Bio: Prey for Sleep was formed in 2006 in Austin, TX. Within months they developed a sound that could most accurately be described as a powerful blend of melodic death and thrash metal, coupled with a hardcore approach and a passion that bleeds through every moment of every song. They wrote and recorded a 5 song EP and shortly after played their first gig in Brooklyn, NY. After a 3-night run in the NE they returned home to play their first local show to an anxious crowd. The EP had landed in the hands of local 101X DJ Chuck Loesch, who put it into immediate rotation on No Control Radio. The band quickly established themselves as heavy hitters in the competitive Austin metal scene.

Holding fast to their belief that metal songs didn’t have to be 17 minute epics, they began recording their first album, “…A Bitter Beginning” in May of 2007 with Grammy nominated producer Tim Gerron at Music Lab Studios in Austin, TX. 10 songs in less than 30 minutes. Brutal, fast, heavy. The album was released in February 2008 to a full house at Stubbs BBQ in Austin, TX.  [ END ]