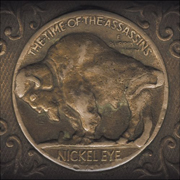 Nickel Eye is the solo project of The Strokes’ bassist Nikolai Fraiture and the band’s first disc, The Time of the Assassin, will be released on Rykodisc on January 29th. Recorded while the Strokes are on hiatus, Nickel Eye is a significant departure from his previous work. Mostly acoustic driven, each track is a story in and of itself, expertly constructed to draw the listener in and is reminiscent of the masters of the story telling genre such as Neil Young and Bruce Springsteen. Guest appearances by Nick Zinner of the Yeah Yeah Yeahs and Regina Spektor round out this extremely well-produced and very well-written record. Fans of good music will absolutely enjoy this disc and will not want to miss picking it up.

I pretty much like the full CD, which is very atypical for me. More often than not I find at least one or two songs that I fast forward through, but there are no extraneous songs to be found amongst this collection. Some of the songs that stand out to me as exceptional are the subdued “Where The Cold Wind Blows” and “This Is The End.” By far the tune that I most enjoyed is the harmonica infused “Another Sunny Afternoon”; It is fun and enjoyable and has withstood repeated listening in my car.

The artwork is quite interesting as well and according to the bands bio is reminiscent of, Lynd Ward’s Gods’ Man, a collection of woodcuts that are considered to be one of the first graphic novels.

At the end of the day, The Time of the Assassin is an exceptional disc and is one that I would highly recommend. It is certainly a disc that will end up in regular rotation in my CD player.  [ END ]